Two actors who played the Doctor in Doctor Who have joined forces in the theatre, swapping the time traveller’s Tardis for a turn on the stage.

When Doctor Who was revived in 2005, Christopher Eccleston came on board the BBC sci-fi series as the Ninth Doctor, a role he held for just one season.

13 years later, Jodie Whittaker became the first woman to play the Doctor, depicting the character up to the present day.

Amid speculation that Jodie is soon going to hand over the reins to a new 14th Doctor, a dramatic performance of the play Antigone that she and Christopher took part in has been made available to watch by the National Theatre.

The National celebrated the sci-fi star power in the cast while informing its followers on Twitter how to watch the play online, tweeting: ‘You wait for one Doctor and two come along at once.’

The pair were both a part of the production in 2012, with Jodie playing the titular role and Christopher depicting the King Creon.

You wait for one Doctor and two come along at once ?#ChristopherEccleston and #JodieWhittaker feature in Antigone.

The play is streaming worldwide on National Theatre at Home: https://t.co/924nhKDGBK. pic.twitter.com/vqwDxsieAB

Having originally been written by Sophocles circa 441BC, this adaptation of the play is a modern retelling of the story, directed by Polly Findlay.

After taking control of a city that was devastated by civil war, King Creon refuses to bury Antigone’s brother, who was deemed a rebel.

Antigone decides to go against the orders of the king by honouring her brother, resulting in Creon taking ‘action against her, risking the wrath of the gods’. Christopher played the Doctor when Doctor Who was revived in 2005 (Picture: BBC)

One fan responded to the announcement of the play streaming online by saying that it was ‘so exciting’ to ‘live at a time where we are able to see these incredible performances overseas’.

‘This was such a good production, exploring both leads and their various shades of grey,’ another stated.

While it hasn’t yet been formally announced that Jodie is going to be leaving Doctor Who, Line of Duty stars Kelly Macdonald and Anna Maxwell Martin have been tipped as possible replacements.

Other stars rumoured to be being considered include Michaela Coel, Olly Alexander, Richard Ayoade and Phoebe Waller-Bridge.

During a recent interview, Christopher remarked that he felt Doctor Who was a ‘bit of a boys’ club’.

‘We need some more Cyberwomen, we need female writers,’ he told Doctor Who magazine.

‘It needs to be addressed, particularly as the Doctor has such a pronounced, for want of a better phrase, feminine side, and such an enthusiastic engagement with the female.’ 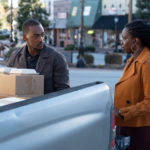