During an appearance on the latest episode of Celebrity Juice, Eamonn Holmes revealed Ruth Langsford hates hearing him breathing when they’re at home together.

The husband and wife duo are co-hosts on This Morning but tonight Eamonn appeared on the show alone.

The 61-year-old presenter seemed to be having the time of his life as he took part in one of the ITV2 programme’s hilarious games while jokingly ranting about his wife.

Host Keith Lemon, 48, explained the rules to the game that involved an inflatable Ruth.

‘A bit of fun on a Thursday night. All you’ve got to do is rub some cream on her, all her cracks and crevices, you don’t want her burning in the Ibiza sun,’ he said.

As Keith proceeded to narrate, the This Morning star rubbed some cream on his ‘wife’s’ forehead, which resulted in laughs from the panel. After Eamonn turned the limp inflatable upside down Emily Atack added: ‘It’s like the weirdest episode of This Morning!’

Eamonn seemed to be enjoying the task as he creatively covered the doll with sunscreen before declaring: ‘This is the most fun I’ve had in ages!’

As the show continued, Keith asked whether it was odd to be making an appearance without Ruth as the duo often appear together. 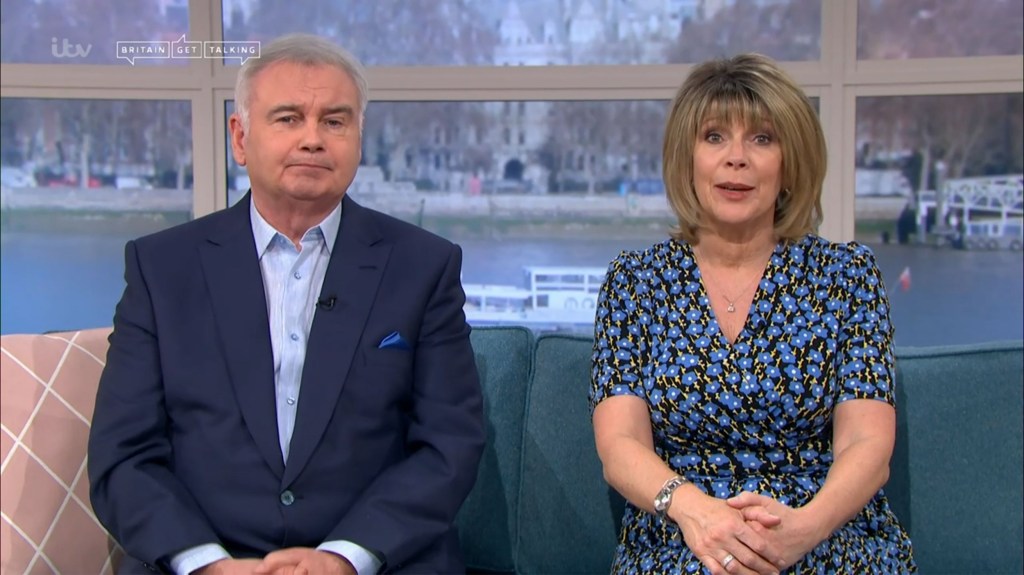 The husband and wife duo are co-hosts on This Morning (Picture: ITV/REX)

Keith tried to stir up some trouble, asking the presenter to ‘rant’ about Ruth while she’s not on the show before quickly adding: ‘We love Ruth, we love Ruth’,

To which Eamonn quipped: ‘Well none of you live with her!’

Keith then went on: ‘She’s a lovely woman, but she must have some bad habits. What’s the thing that you dislike about Ruth?’

Eamonn explained that the main thing he dislikes is the fact that she’s a stickler for detail and time.

He added: ‘She has this thing called misophonia, which basically, if you have a partner or someone in the house breathes, you hate them!’

Misophonia is a disorder in which certain sounds trigger emotional or physiological responses that some might perceive as unreasonable.

The game ended with someone in the studio calling Eamonn pretending to be Ruth, telling him to stop badmouthing her.

Celebrity Juice airs on Thursday at 10pm on ITV2. Can Air-Drying Your Hair Cause Damage?