A throwback clip of a 16-year-old Ed Sheeran has resurfaced online of the moment he got rejected by Arlene Phillips in an audition for Britannia High.

The 29-year-old singer was turned down by Arlene after he awkwardly attempted to dance to a Justin Timberlake song in one of his auditions.

The Shape of You hitmaker wasn’t the only famous face to audition for the musical either, pop star Pixie Lott and West End star Zizi Strallen also had hopes of being selected.

Britannia High was an ITV musical drama which was created by Arlene and producer David Ian.

The programme aired in 2008, with ITV also filming the audition process for a behind-the-scenes special at the time.

Despite the rest of the judges being stunned by Ed’s vocal ability, Arlene wasn’t impressed by his dance moves so ruled him out of the competition completely.

In a throwback clip, a teenage Ed can be seen dancing and stomping to Justin Timberlake’s hit song Like I Love You.

Before he had even finished dancing, Arlene began: ‘Not even an option.

‘Eventually, we are going to have to find some people who can dance because they can’t all not dance.’

‘We are looking for triple threats, they’ve got to be able to sing, dance, and act,’ she had previously stated.

Ed’s voice was enough to get him through to the next round, and by the look of it, he was just as surprised as Arlene as he said: ‘I am really surprised actually because I can’t dance.’

During a group dance routine, Ed wasn’t doing so well as Arlene commented: ‘Ed hasn’t got a clue what he’s doing, but he is trying.’

‘I’m just trying to really get it in my head. I think I messed up as I got kicked in the face by accident,’ Ed told the camera.

Despite the singer not being selected for the show, he definitely got the last laugh after shooting to fame in 2011.

His first debut album which contained his first hit The A Team shot to number one, and from there, he has just gone from strength to strength.

He has won a number of Brit and Grammy Awards and both his second and third album both topped the UK charts. 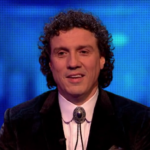