Stacey Solomon felt like she ‘wasn’t doing a good job’ when trying to feed her youngest son Rex as a baby.

During Friday’s Loose Women, the panel were discussing whether it is acceptable to call a baby ‘chunky’.

It comes after Kim Kardashian posted a throwback snap of her baby Chicago and her sister Kylie Jenner’s daughter Stormi.

The reality star captioned the photo: ‘OMG found this pic in my phone and our babies are so tiny and cute and chunky and perfect!!!’

Speaking about her own experience as a mum, Stacey, who shares Rex with TV presenter Joe Swash, said all she ever wanted was for her son to be ‘chunky’.

‘All I ever wanted him to be was big and fat and chunky and have rolls so that I knew I was doing a good job and I wasn’t,’ she began.

‘He was really skinny and scrawny.’

‘Hang on,’ Nadia Sawalha interrupted. ‘You were doing a good job.’

Stacey continued: ‘But, you know what I mean I wasn’t able to feed him the way I wanted to feed him.

‘So, I loved to see a thriving, chunky baby and it makes me emotional.’

Stacey was 17 when she first fell pregnant with her eldest son Zachery, now 12.

She later gave birth to Leighton, who is now eight, with ex-fiancé Aaron Barham who she split from in 2014.

The former X Factor star went on to have Rex with Joe, who was born in 2019.

Stacey’s partner Joe also has a son, Harry, from a previous relationship. 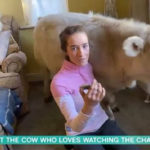 This Morning fans obsessed with cow that loves watching The Chase: ‘It’s me, I’m the cow’ 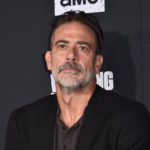