The cast of Fate: The Winx Saga have spoken out about the whitewashing controversy in the show and have said they’re ‘being vocal’ about changes needing to be made in a potential season 2.

When the show was announced, fans of The Winx Club cartoons were disheartened to discover that two white actors had been cast as characters of colour.

Flora and Musa, who are depicted as Latina and East Asian respectively in the cartoons, have been changed for the Netflix series.

Musa – a character based on Lucy Liu according to creator Iginio Straffi – is being portrayed by Elisha Applebaum, a white English actress, on the show, while Eliot Salt, Terra on the series, the cousin of the Jennifer Lopez-based Flora.

Speaking on the casting choices, Eliot told Metro.co.uk that the team have been speaking out behind the scenes in order to rectify the issue, and that Flora may make an appearance in future episodes, should the show be renewed.

‘I’m really glad that those conversations have happened and have been heard,’ she told us.

‘I think those are more than valid criticisms, and if we get a series too, I wish we had control enough to say that it will be rectified, but I’m fairly certain that it will be.

‘The voices have been heard, and also we’ve tried to amplify them behind the scenes as much as we can.’

Precious Mustapha, whose character Aisha is Black in both the cartoon and the series added: ‘We’re definitely being vocal about that.’

Elisa agreed, and said that she hoped the series is seen as a separate entity to the cartoon.

She said: ‘It’s always upsetting that fans aren’t happy, at changes that have been made, but obviously casting made a decision on who they wanted and we were cast as The Winx Club. The new Fate: The Winx Saga.

‘I hope we did them justice and I hope, from the reactions we’ve had, we’ve done such a good job in creating these characters, they are quite far from the actual animation.

‘I hope that everyone fell in love with them as well as we did, because they were such fun characters to play. I hope we performed them in the way that they wanted us to.’

Abigail Cowen, who plays leading lady Bloom, also agreed, and said that not only should there be diversity developments in front of the camera, but behind the scenes on the show too.

‘We can’t speak on the casting process, as we’re not we’re not a part of that, but it is an important thing to talk about, and we definitely respect everyone’s concerns,’ she said.

‘I do think that there was a lot of confusion with Terra’s character because people thought that she was supposed to be Flora.

‘At that time I don’t know if we were really able to explain it without giving away details and stuff, so I think maybe that’s changed because fans now have a hope that there will be a Flora and then they also met Terra, and you can’t not love her.

‘Elliot does such a tremendous job of playing her and I think it is cleared up in the show that she is definitely not Flora, she is Terra, who is a cousin of Flora. I think people are aware that it was teased.

‘Maybe we’ll have a Flora if we get a second season.’

‘I also think that maybe they’ve fallen in love with Elisha playing Musa because she is so talented and just as an actor,’ Abigail continued. ‘Personally, working alongside her, she’s such a wonderful person and wonderful actress.

‘So we can’t speak on the casting process but I do recognise that it is an important conversation to have because diversity is very important.

‘Representation is very important – in front of the camera and behind the camera.’ 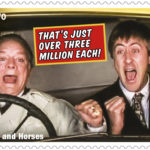 Where to buy the Only Fools and Horses commemorative stamps 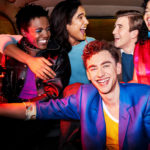