Ranvir Singh was left raging over a debate on beauty pageants during today’s Good Morning Britain.

The Strictly Come Dancing star, 44, was discussing reports that three former Miss France candidates had taken legal action against organisers and Endemol Production, the company that makes the TV show.

They stated that the companies are breaking French labour law by having discriminatory selection criteria, with contestants not allowed to gain weight, change their hair or have a husband and children.

Hitting out at the rules on this morning’s instalment, the host explained that the rules were ‘upsetting’ to her.

Introducing the segment, Richard Madeley said: ‘Three rejected Miss France contestants are suing the beauty contest that rejected them for alleged discrimination based on the way they look.’

‘Part of the entry requirements say contestants are not allowed…,’ Ranvir began before needing to pause.

‘I can’t actually read it out, it’s actually upsetting me.’

As a baffled Richard looked on, she continued: ‘It says competitors are not allowed to gain weight, you must be taller than 5’5, you cannot have been married or have children.

‘Is the traditional beauty pageant now out of date? It’s a very short debate, the answer is yes.’

Miss France, which turned 100 this year, has been subject to complaints that it is sexist for decades, with women walking in swimsuits and ballgowns while answering questions on their personality.

Despite the complaints, millions still tune in to the event every year.

The next Miss France will take place on December 11, with Caen, in Northern France, hosting the ceremony. 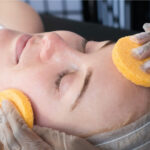