Harry Redknapp and his wife Sandra are set to get their coronavirus vaccines today.

The former Tottenham Hotspur manager, 73, confirmed they will be getting their first dose on today’s instalment of Lorraine.

Speaking of the good news, he told the host: ‘Me and Sandra are off today at midday to get the vaccine. I’m pleased to get that done, the first one.

‘Obviously we have to wait for the second one. We need to get it done, I think it’s great if everybody gets a vaccine.’

The I’m A Celebrity… Get Me Out Of Here! winner also spilled the beans on how the couple have been ‘making the most’ of the time together.

‘It’s tough in lockdown for everybody,’ he said of the pandemic. ‘Sandra is a great cook so I look forward to my dinner every night.

‘She’s just come around, just now, and said, “what do you fancy tonight?” So I put my order in, have a nice dinner and maybe after have one glass of wine.

‘That’s it really, we make the most of it. We’ve got football on all day, football matches, plenty of football to watch so I’m happy. Sandra’s got all the soaps on, so we’re keeping happy.’

Football, soaps, wine and a jam roly-poly, we’re definitely jealous of their lockdown set up.

Harry and Sandra delighted fans with their sweet romance after taking part in Celebrity Gogglebox, but the star teased that he could be making another return to the small screen.

Chatting to the Sun, he confessed that he would love to make a surprise appearance in EastEnders, declaring it his ‘ambition’ for this year.

In fact, he already has his storyline worked out and wants to play himself, while becoming pals with Danny Dyer’s Mick Carter.

We would expect nothing less.

Lifting the lid on a possible plot, he explained that he would move to Walford, ‘around the corner’ from Albert Square.

The pair would set up a dodgy business together, with things unsurprisingly falling apart.

Not only has Harry got his plots figured out, he’s also sorted out his exit, with the character being ‘bumped off’ after a year.

Over to you, BBC bosses… 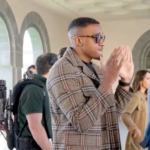 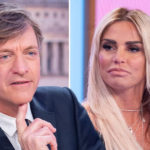