Jackass star Sean McInerney, also known as Poopies, was in tears as he recalled being bitten by a shark in a horrific attack.

The accident happened ahead of Jackass 4, with the crew filming a stunt called ‘Jump The Shark’ inspired by a Happy Days episode when The Fonz water-skis up a ramp and over a shark.

Poopies attempted to wakeboard over shark infested waters, but disaster struck when he became surrounded by 10 sharks.

Recounting his ordeal and fighting back tears, he said: ‘I was trying to swim out and I couldn’t. I couldn’t swim out, dude. I knew I got bit and when I got bit, I thought I was going to get attacked by like six more sharks.’

He went on to explain how he got out of the situation, adding: ‘I kind of lifted it up and when I lifted it up it freaking fell over and that’s when I knew I was in trouble.

‘And that’s when I knew I was probably going to die, right now. But luckily, I didn’t. I just got bit once. Poopies was surrounded by sharks when the accident happened (Picture: YouTube)

‘I had the best safety I think I ever could have asked for. Right when I got bit the safety medic jumped on me and he pretty much sacrificed his own life for my life.’

Poopies underwent two operations to reattach two ‘completely severed arteries’ and ‘all of his severed tendons’. Steve-O described the shark attack as the ‘gnarliest’ incident to ever take place on Jackass.

‘Considering this was Poopies first time on television ever, it was a real smash hit and the whole world is going to fall in love with this guy,’ he added.

Despite the terrifying accident, Poopies wears his shark bite like a badge of honour.

‘I’m the newest member of Jackass and I had to show the boys how it’s done,’ he enthused. 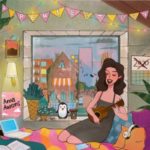