I’m A Celebrity star Shane Richie found himself facing his fears in the latest Bushtucker trial and that included being confronted by 200 spiders.

The EastEnders actor, 56, who is best known for playing Alfie Moon on the soap, was voted in by the public to tackle The Cruel Jewels and fans have now been given a first look at him in action ahead of Tuesday night’s episode of the show.

Shane is seen sat in a throne with his head locked in a perspex box that is later revealed to be filled with not one, but 200, spiders.

He’s forced to unscrew the stars in front of him by using his tongue and joked it was like a scene from 1990 movie Arachnophobia, as he pushed past the cobwebs to start working on releasing the stars.

The actor was convinced that it would be Jessica Plummer facing the trial, after she only managed to secure one star while taking on the Harmoury trial with AJ Pritchard the day before.

AJ had found five stars in the impossible trial that saw them hunting around in the dark, with both him and Jess ‘gutted’ they didn’t successfully retrieve more.

It was the start of tensions simmering in camp, as the celebs have been given their specific roles to carry out, after Jordan North was voted in as leader.

Fans watched on as Shane clashed with AJ over boiling hot water and Giovanna Fletcher was left irked when Vernon Kay kept commenting as she was trying to prepare dinner for camp.

Her good friend Emma Willis joked that Giovanna had shown him the ‘mum stare’, telling Lorraine Kelly: ‘We saw a few little looks from her last night, and they were typical mum looks.’

Giovanna’s husband Tom Fletcher had also mocked the moment online as he posted to Instagram: ‘The faces that I’ve seen her pull tonight… you don’t want to see those faces.’

I’m A Celebrity continues tonight on ITV at 9.15pm 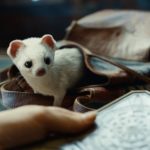 A Definitive List of All the His Dark Materials Daemons