She joins a talented cast that also includes Line of Duty star Craig Parkinson, This Is England actor Thomas Thurgoose, Sex Education’s Sharon Duncan-Brewster, Parminder Nagra – best known for Bend It Like Beckham – and Savannah Steyn from The Tunnel.

Diany shared that the diversity of the cast ‘didn’t even cross my mind’ while filming, but praised the programme for its choices.

Speaking to Metro.co.uk and other outlets at a press event, she said: ‘I’m glad they included some Black women in there and they didn’t just stop at “here’s just a Black woman” but gave them central roles. ‘I feel there’s not really a need to separate the two. What they did well with this is it didn’t even cross my mind as to why they would have picked people of colour for the roles they did. It’s just great that they did.’

Diany plays the mysterious Genevieve who has the ability to make her long dreadlocks do whatever she commands – including kill people.

Creating the special effects for her super powered hair was a real team effort, says Diany, and involved some incredible work from a daring stunt team.

‘Putting on the wig every morning was quite easy, I didn’t really have any input but it didn’t take much time,’ she explained.

‘Once we were on set there was a scene where I was choking Drew (Thurgoose). At the start it would be a few gestures with my face to signal that my hair is about to strangle him.

‘There were other times where you would have stuntmen rigged up to fly across a room and I was going off of them as well.

‘It was pretty fun to be honest to pretend you’ve got powers is always really cool.’

Intergalactic starts April 30 on Sky One and NOW TV. 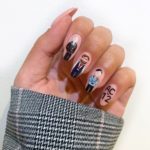 Line of Duty: Ever Wondered What a True Fan Looks Like? This AC-12 Manicure Says It All