Countdown’s Rachel Riley occasionally has to contend with rude words being spelled out from her selection of vowels and consonants.

So it might be a comfort that it happens to everyone who tries their hand at the game.

The presenters of Ireland AM were in stitches when a game of Countdown went awry and led to two potential gaffes.

In the studio of the Virgin Media One show, host Alan Hughes was in charge of selecting the letters, while Laura Woods asked for vowels and consonants.

Laura first asked for a consonant, with Alandrawing a ‘C’ and explaining that he would be writing the letters up on the board.

Then came a vowel, with Alan drawing a ‘U’ – and Laura, realising what might happen, couldn’t stop giggling as she ordered a consonant.

Alan said: ‘We could get some really unusual words here, couldn’t we, on breakfast television.’

Presenters Karen Koster and Tommy Bowe, who were linked up via video, were equally as tickled – especially when Alan next drew an ‘M’.

That was pretty bad, but the next letter showed that it could have been a lot worse, as Alan picked up the letter T.

Crew off camera could be heard bursting into laughter, as Karen asked: ‘Is this a joke?’

The Ireland AM team should probably thank their lucky stars, as they were one letter away from a whole lot of guaranteed complaints.

One person tweeted: ‘What are the chances?’, while another wrote: ‘I was thinking this can go one of two ways, but it managed to go both.’

We doubt Countdown will be a regular segment on the show – too many dangers.

Meanwhile, the original show is set to look very different soon enough, as Nick Hewer has quit Countdown after 10 years.

The 76-year-old said on Twitter: ‘Delighted to be back in the Countdown studio after another enforced lockdown, BUT this latest lockdown has given me an opportunity to consider my future life and I’ve decided it’s a good time to step down at the end of my contract in the New Year.

‘As someone in his 77th year who will be in his 10th year hosting the great British institution that is Countdown, I think it’s time to smell the flowers and get a dog.’

His successor has yet to be announced. 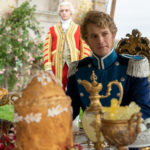 Did you spot Bridgerton’s Prince Friedrich in Harry Potter?