Jeremy Vine has claimed Eggheads was a ‘victim of its own success’ after it was axed by the BBC.

The game show, which saw wannabe quiz whizzes facing off against a team of championship players, is now being moved to Channel 5 for a reboot after 18 years on the Beeb.

It’s believed that the decision was made by the BBC to make way for younger viewers, with Eggheads generally being watched more by older people.

Host Jeremy has supported the theory, and speaking to RadioTimes, said: ‘It’s difficult being the BBC. The thing that made Eggheads tricky for them was that research showed that it had the oldest audience on British television.

‘I think that plays to our favour. The older viewer is so loyal. When I ring my mum, if Eggheads is on, she’ll tell me off and hang up.’

‘I always knew the show wouldn’t be lost forever,’ he added. ‘It’s such a thrill to be presenting undoubtedly one of the greatest TV quizzes of all time.

‘I love the fact that just as people were beginning to think we might be gone forever, we’re suddenly back with a bang.’

He was joined via zoom by Judith Keppel, a regular on the series and the first ever winner of Who Wants To Be A Millionaire, who said she was excited to bring new life to the show.

Commissioning Editor Daniel Pearl added: ‘I’m delighted that Eggheads, one of the UK’s most loved quiz shows, has found a brand-new home on Channel 5.

‘This is yet another step in the transformation of Channel 5 as it grows its audience rapidly.’

RadioTimes is on sale now. 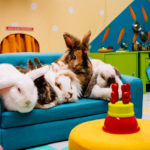