Zack has become the latest baker to be eliminated from Junior Bake Off 2021, leaving fans of the show ‘gutted’ and ‘heartbroken’.

During today’s programme on Channel 4, for the second day of finals week, the contestants were tasked with creating two internationally-themed bakes – first a Japanese deco cake for their technical and then a selection of tartlets for their showstopper.

For his showstopper, Zack, 13, decided to make Mexican Chilli Chocolate Tartlets, combining the chocolate with a spicy chilli kick and decorating with tempered chocolate and marshmallow.

While the finish on his tartlets was impressive, judges Liam Charles and Ravneet Gill told him that they found the spicy flavour a bit too overpowering, while his pastry was slightly too bendy when it should have snapped easily.

Having placed second last in the technical challenge, in the end Liam and Ravneet decided that unfortunately Zack couldn’t proceed to the third day of finals week.

Several Junior Bake Off viewers expressed their disappointment over Zack’s elimination, especially considering how well he had been doing in the competition up until this point.

‘So gutted for Zack! Such a genuinely lovely kid and been up there with the best the whole time,’ one person tweeted.

‘Heartbroken that Zack is out, he is so much better than what happened today,’ another remarked.

Someone else commented that they were ‘gutted’ for Zack, as he is ‘such a talented baker’.

‘Zack was such [a] supportive team member! Loved his baking skills, he will be missed in the tent!’ a fan wrote.

After presenter Harry Hill announced that he was out of the competition, Zack said that he would take away ‘how much fun’ he’s had in the tent, in addition to ‘how proud I’ve made myself for doing so well’.

Former Great British Bake Off star Liam said that Zack would ‘be missed’ in the tent.

‘He brought so much creativity. His flavour combinations were sometimes absolutely flawless,’ the judge said.

Ravneet added that Zack ‘just had a bad day’.

‘One bad day at this stage of the competition can mean that you go home and Zack was unlucky today,’ the pastry chef said.

Throughout the series, Zack has proven not only how accomplished a baker he is, but also how much he is willing to lend a helping hand when someone is in need.

Last week, Zack assisted Maddi when she burst into tears over making her whipped cream split, while today he – as well as several other bakers – helped Naima finish off her cake with one minute to go in the technical. 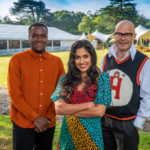 Who can apply to Junior Bake Off – how old do they have to be? 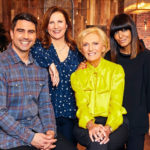 What time is Celebrity Best Home Cook on and who is in the line-up?