Junior Bake Off judge Liam Charles stepped in to comfort contestant Safiyyah when she burst into tears after it was announced she was leaving the competition.

Today, the tense semi-final of Junior Bake Off aired on Channel 4.

Safiyyah, 14, was off to a strong start, placing first in the technical, for which she and her fellow bakers were tasked with creating fiddly macaron handbags.

But her showstopper – where she attempted to create a plane made out of choux pastries – was unfortunately not enough to cement her place in tomorrow’s final.

When presenter Harry Hill announced that she would be leaving the competition, Safiyyah admitted that she ‘kind of knew it’.

However, she then got up from her stool as she started crying, with Liam following her so he could emphasise just how close it was between her and her competitors.

‘I can’t express to you just how difficult that decision was,’ he told her, as fellow judge Ravneet Gill and Safiyyah’s peers joined her around one of the baking stations.

When Safiyyah told them that she ‘just wanted to make it to the final’, Liam comedically piped up saying he did too, as he was eliminated from The Great British Bake Off in week eight of the 2017 series.

Despite feeling disappointed about no longer being in the running, Safiyyah expressed how proud she felt of Naima, 10, who was named star baker at the end of the episode.

‘I’m really happy for Naima, because she’s done so well. I’m proud of her,’ Safiyyah told the camera.

‘Gutted for Safiyyah as she is such a good baker. And she left with grace and dignity, it was good to see her supporting Naima at the end,’ one person tweeted.

‘What a tough decision for the judges on #juniorbakeoff today. I wouldn’t have been able [to] call it either,’ someone else said.

‘Well done Naima on getting star baker! Safiyyah did so well to get to the semi final, her macaron handbags were brilliant.’

Tomorrow, Naima, Robbie, Cece and Reece will compete for the chance to be named the winner of Junior Bake Off 2021.

If the rest of the series is anything to go by, it’s going to be a nail-biter!

The Junior Bake Off final airs tomorrow at 5pm on Channel 4. 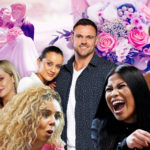 Married At First Sight Australia: Where can you find the cast of season 6 on Instagram?

The “Boring” Skincare Products That Work