Laura Whitmore has given fans a first look at her baby girl on Celebrity Juice… well, kind of.

Just days after giving birth at the end of March, Laura was back at work on the raunchy panel show, and while she’s keeping the baby away from the public eye, had no trouble impersonating her.

Tasked by Keith Lemon to impersonate a half-Irish, half-Scottish baby, Irish lass Laura joked that the baby will probably be acting drunk half the time.

Earning a point for her team, Laura – who is married to Scottish comedian Iain Stirling – started waving her arms in the air while slurring her words.

As her team mates Jordan North and Maya Jama laughed on, Laura hiccupped and she rolled around in her chair before straightening up.

We think she got it absolutely nailed. Laura and Iain confirmed the news of the baby’s arrival on April 2, following the news breaking ahead of time after Iain was spotted holding a carry cot with their baby girl inside.

Sharing a photo of her cuddling her daughter online, the Love Island host wrote: ‘Thanks for all the kind messages at this time. We are in love x.’ Laura delivered her baby girl at the end of March (Picture: Instagram)

While most would take maternity leave, co-host Emily Atack confirmed Laura would be returning to her hosting duties as usual, labelling her ‘Superwoman’.

Emily told us: ‘I think she insisted she gets back to work, which is amazing. Incredible. She is a soldier, she’s amazing.’

Laura and Iain have been dating since 2017 after meeting through friends, and moved in together the year after.

The stars secretly got married in Dublin in 2020 and, when their marriage certificate was discovered, announced they were expecting a baby as well. 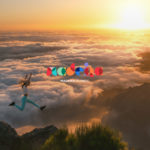 MADEIRA. Belongs to all The Circle US: Inside Savannah Palacio’s luxurious Instagram lifestyle from secret beaches to partying with Rihanna