The singer hosted a party over the weekend, with a ‘small gathering’ of friends helping her celebrate her 30th birthday at Casa Cruz restaurant in West London.

Rita has since issued an apology, admitting she is ‘deeply sorry’ and ‘embarrassed’ by the poor judgement and also paying a £10,000 fine.

Gloria spoke on today’s Loose Women to denounce the singer’s actions, saying that it was a bad decision.

Gloria also said that her actions were irresponsible, especially given the sacrifices the public has made during the pandemic.

‘We all have to do our very best [to combat the virus]. It’s not about the money,’ she said, referencing the fine.

Her co-presenter Janet Street-Porter added: ‘Rita Ora has a huge number of fans and she influences a lot of young people. We’ve already got a big problem where people of a certain age think they’re not going to get ill. They don’t care. She’s setting a terrible example.’

In her statement apologising for the party, Rita said: ‘Hello all, I attended a small gathering with some friends to celebrate my 30th birthday.

‘It was a spur of the moment decision made with the misguided view that we were coming out of lockdown and this would be OK… I’m deeply sorry for breaking the rules and in turn understand that this puts people at risk.’

She continued: ‘This was a serious and inexcusable error of judgement. Given the restrictions, I realise how irresponsible these actions were and I take full responsibility. ‘I feel particularly embarrassed knowing first-hand how hard people have worked to combat this terrible illness and being fully aware of the sacrifices that people and businesses have made to help keep us all safe.’

Rita shared photos from her celebratory birthday weekend, including a picture of a three-tier cake. Celebrity guests at the dinner included Poppy and Cara Delevingne and Vas J Morgan.

Gloria isn’t the only star to condemn her behaviour, with Piers Morgan criticising RIta for supporting the NHS before breaking the rules. 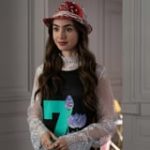