Sharon was open with Faye about her experiences with women (Picture: ITV)

Love Island’s Sharon Gaffka talked openly about her sexuality during her time in the villa, with some of the scenes never making it to air.

The civil servant, who was dumped from the show last month, spoke with fellow contestant Faye Winter about her sexual encounters with women.

‘I had a conversation with Faye about it and she asked, “Are you bisexual?” And I said, “It’s something I’ve explored but I’ve never been in a relationship with a woman”,’ Sharon exclusively told Metro.co.uk.

‘A lot of the conversations I had were about modern dating on the show were never aired, but I was very open about sexuality and being a mixed-race woman in modern dating.’

Sharon had previously said during the challenge: ‘How am I supposed to find out if I like girls and boys if I don’t find out for myself.’

Sharon had an honest conversation with Faye about her sexuality (Picture: ITV)

‘There’s a sort of logistical difficulty, because although Islanders don’t have to be 100% straight, the format must sort of give [the] Islanders an equal choice when coupling up,’ ITV commissioner Amanda Stavri said.

Metro.co.uk recently investigated how logistically difficult it would be to create a series that is inclusive of all genders and sexualities, and it turns out, it’s pretty straightforward.

‘How it is right now, you can kind of predict what’s going to happen: If there’s a straight couple who are happy, the producers will just send in a person for whoever they think is likely to stray and send in a person who’s their type,’ former contestant Megan Barton Hanson told us.

‘If there was an LGBT+ cast you could be tempted by anyone. I think it would be much juicier.’

If Love Island did make an LGBTQ+ version, would Sharon want to sign up?

‘I think putting myself through something like that again is quite intense, but I’m always open to seeing what opportunities happen,’ she said. 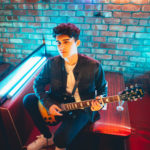