The contestant was left heartbroken after coming face to face with Casa Amor contestant Lillie Haynes, who revealed the intimate details of her time with Liam during a tense conversation.

Before dumping him, Millie gathered the female contestants together to pass on what she had learnt during her conversation, saying: ‘He just lied – he played it down obviously.’ Liam and Millie are over (Picture: ITV) 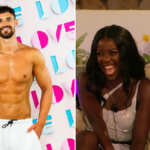 Love Island: Who is Matthew MacNabb? Age, job and Instagram