Teddy and Rachel get down to business (Picture: ITV)

And he’s in no way holding back, as on his first date with Rachel Finni, the pair are chatting about orgasms in the time it takes to make it through the bread basket.

Teddy, 26, is tasked with choosing four girls for speed dating on the Hideaway Terrace, and he opts to get to know Kaz Kamwi, Sharon Gaffka, Faye Winter and Rachel.

But it’s his second date, with Rachel, when sparks really fly.

The 29-year-old, who is basically single since Brad McClelland moved on to Lucinda Stafford, tells the new boy: ‘I’m very modern in my dating. I don’t think a guy should always pay, I don’t expect a guy to pull out my chair… I want a guy to be a gentleman, but I don’t want a guy to think I’m one of those girls that fully depends on them to make me happy.

‘I truly believe in life I can give myself anything I want, including an orgasm, if I’m going to go that far.’

Teddy replies: ‘You shouldn’t need to do the orgasm on your own though, surely? It should be a joint effort.’ Teddy wastes no time getting to know the girls (Picture: ITV)

Rachel says: ‘Well, I’m waiting on someone to come along and do that for me. Hopefully not for long that won’t be the case.

‘It’s too sexy right now, the energy is too hot. It’s been a while since I’ve felt like this.’

Clearly the date gets Rachel hot and bothered, as she later says in the Beach Hut: ‘I am ready to start s***, because I want that guy.’

Unfortunately for Rachel, it seems she’ll have some competition, as Kaz thinks the ‘villa gods’ have sent Teddy in for her, Sharon gets flirty with the financial consultant, and Faye plays footsie with him under the table.

Rachel admits: ‘Obviously the claws are going to come out, we’re competing for this guy.’

However, it could be that one girl won’t even get a chance to make her move, as a recoupling tonight will see the boys with the power – and one of the girls will be dumped from the villa.

As it stands, Jake Cornish is expected to stay coupled with Liberty Poole, Toby Aromolaran is cracking on with Chloe, Brad has made a move on Lucinda, Liam Reardon is getting close to Millie Court, and Aaron Francis seems to be back with Sharon after initially breaking things off.

But Kaz, Faye and Rachel are all single, and with just Hugo Hammond and bombshell Teddy left, one of them could get the chop.

Love Island continues tonight on ITV2 at a later time of 10pm. 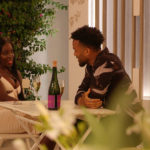