The writers of Netflix series Lucifer have teased that one of the cast will be bowing out of the show in the penultimate episode – but who could it be?

The people behind the scenes on the romantic detective drama hinted that a familiar face will be leaving in a moment that ‘brings the feels’ in the episode Goodbye, Lucifer from upcoming season six.

Teasing the plot line, the writers of the show posted on Twitter, writing: ‘Who will be saying “goodbye” in #Lucifer’s second-to-last episode?’

They added: ‘You have 17 eps to go before finding out, and you better believe [writer Chris Rafferty] is bringing the feels. But don’t worry — he wants you all to know that he’s looking out for your hearts.’

There are plenty of twists and turns for viewers to look out for in the upcoming sixth season.

In a first look at a script for the upcoming season, the writing team teased the title of Season six episode five: The Murder of Lucifer Morningstar.

Season six will be the final series of the beloved romantic detective dramedy, and fans have a good chunk of time to wait before then.

In fact, we’re not even getting Lucifer season 5 part 2 anytime soon. The writing team have confirmed that they are yet to complete the new episodes, after coronavirus threw production into chaos.

Lucifer is available now on Amazon Prime Video and Netflix 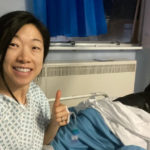