Mad Men actor Jon Hamm has revealed he auditioned to play everyone’s favourite dad, Sandy Cohen, on The OC, but the role went to Peter Gallagher instead.

The 49-year-old actor tried out for the part when he was in his early 30s alongside the likes of Harry Hamlin.

Speaking on Rolling Stone’s Too Long, Didn’t Watch podcast, Hamm recalled: ‘I remember walking in and being like, “Is that Peter Gallagher? Why am I here?” I love Peter Gallagher, but I was just like, “Dang!”‘

Elsewhere during the interview, Hamm said he was often typecast as father figures early on in his career because casting agents thought he didn’t look like he could play a fresh-faced teen.

‘I never looked young enough to be in high school, even when I first got out here and I was 25, so I missed out on all of the Dawson’s Creek and all the early, early WB shows,’ he continued.

‘So then they were like, “Come in and play one of the dads,” but I don’t look like, I’m not old enough to be that, either. So I had to wait around a long time.’

Hamm is best known for playing advertising executive Don Draper in the AMC television drama series Mad Men, which ran from 2007 to 2015.

He won two Golden Globe awards for his portrayal of Don, as well as one Emmy.

The OC is available to stream on Amazon Prime Video. 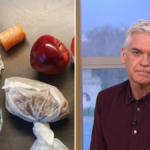 Phillip Schofield shocked at appalling school meal parcels: ‘What the hell is that?’