Season six of the hit reality series down under was originally filmed in 2019, but is currently playing out for its UK viewers on E4. It sees couples go into marriage completely bind, as they tie the knot on the same day they meet, with Matthew wedding Lauren and fans instantly falling head over heels for the couple.

Matthew shocked Lauren when he revealed that he was actually a virgin, but days later the pair were hooking up on their honeymoon and viewers were sure this was one couple that would go the distance.

However, Matthew dropped a very bold statement about wife Lauren during the latest episode of MAFS, while chatting to the other grooms at their weekly dinner party.

Despite sleeping with Lauren and insisting he wanted to be with her, Matthew then made a huge U-turn, as he revealed during his boys’ chat that he isn’t actually attracted to her and ‘there’s nothing there’.

Of course, being reality TV and all, Lauren awkwardly heard the whole thing.

Matthew told the camera: ‘Lauren wants someone who can’t get enough of her, wants their hands all over her, wants to throw her on the bed and do stuff and I can’t give her that.’

Speaking to the boys, Matthew said: ‘What happens if the reason I’m not able to show any affection or the attention that she wants is because I’m just not attracted to her. I’m just not feeling those urges.’

‘It shouldn’t be an effort, it shouldn’t be something I have to consciously think of and force myself to do. Maybe that’s why I’m feeling lost, because I’m trying to force something that just isn’t there,’ he confessed.

‘Like I have no urge to rip her clothes off and throw her on the bed at all, Matt admitted.

Viewers watching couldn’t believe that Matt had spoken about Lauren while she was sat just metres away, with one tweeting: ‘Matt saying he’s not attracted to Lauren!! Ouch!! At least make sure she’s not in earshot!’

Another vented: ‘I understand the way Matt is feeling but HUN TELL LAUREN FIRST!!!! Not at a bloody dinner table with the lads. That is disrespectful. I’d be fuming. #MAFSAustralia.’

‘This is painful to watch, I feel sorry for Lauren and Matt,’ tweeted one more.

After hearing Matt telling the boys he didn’t fancy her, Lauren confronted him and questioned whether he had ‘used’ her just to lose his virginity.

Matt’s comments to the boys came after he had a conversation with Lauren, where she admitted to previously dating girls and asked him how he felt about ‘swinging and threesomes’.

‘I don’t know if you’d handle it,’ she told him. ‘There are certain things I might be in to, you know? How would you feel if I was in to swinging and threesomes.’

Lauren said: ‘I am a very sexually open person, I worry it might be a bit much for you.’

Jumping to Matt’s defence, some viewers thought him revealing he wasn’t attracted to her was because he felt ‘uncomfortable’ with her sexual preferences.

‘Why is everyone mad that Matt isn’t into Lauren? You can’t force yourself to be attracted to someone #MarriedatfirstsightAustralia,’ argued one fan.

‘#MarriedatfirstsightAustralia here it is, Matt isn’t as into it as Lauren and interprets that as meaning he isn’t attracted to her. He can’t figure out that her sex talk makes him feel uncomfortable and emasculated,’ tweeted one viewer.

Another agreed: ‘Lauren’s disclosures has scared Matt off! It’s too much for him to handle, his brain literally can’t compute so he’s done the next best thing by saying he’s not attracted to her so he can bail. Attracted enough to sh*g her though.’

‘I’m the only one still on Matt’s side looking at Twitter. Not even sorry. Lauren has been so unfair this last week & he’s not sure how to handle it. Maybe don’t say out loud to everyone you aren’t attracted – that’s not right. But I don’t think that takes everything else away,’ posted another viewer. 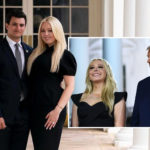 Who is Donald Trump’s daughter Tiffany and when did she get engaged to Michael Boulos?