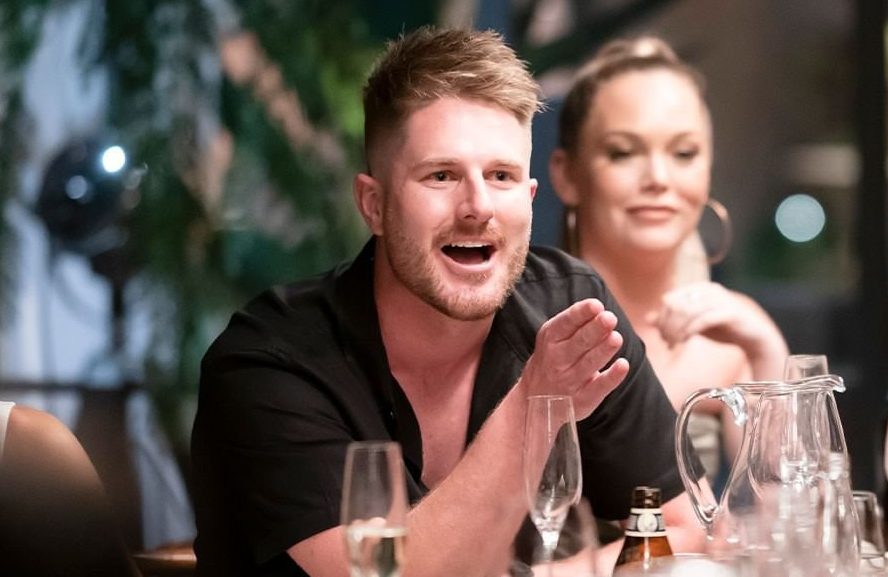 Bryce had a brief acting career before Married at First Sight (Picture: Nine)

Pictures of Married At First Sight star Bryce Ruthven’s previous screen career have resurfaced online, revealing his appearances on Home and Away.

The reality star, 31, spent three months in Summer Bay back in 2008 and resurfaced images show him in character on the long-running Aussie soap.

The radio announcer appeared as the cousin of bad boy Aden Jeffries (Todd Lasance) on a number of episodes 13 years ago.

His character was unnamed, but he appeared in the background of scenes in several episodes during his brief acting career.

It wasn’t his only role. Bryce also had a guest spot on drama series All Saints, as well as attending the National Institute of Dramatic Art (NIDA).

He left the profession to focus on his dreams of becoming a professional footballer and later became a radio presenter. Bryce can be seen in the background, behind actor Todd holding the bag on the second to right (Picture: Seven) Bryce (second to right) starred on the soap in 2008 (Picture: Seven)

Meanwhile, Bryce’s time on Married At First Sight has proven to be one of the most controversial on the show.

It comes after star Rebecca Zemek (Beck) claimed that production on season eight of the reality series was shut down after Bryce kissed her on the cheek without consent.

On a recent episode of the programme, which is currently airing in Australia, viewers watched as radio announcer Bryce planted a kiss on the cheek of business manager Beck, catching her completely unawares. Bryce left acting behind to try make it as a footballer (Picture: Seven) Melissa and Bryce were paired up on MAFS (Picture: Nine)

Fans of the show are also not happy with Channel 9 for airing Bryce and Melissa Rawson’s ‘emotionally abusive’ behaviour and are demanding an apology from the network.

Thousands of viewers have signed a Change.org campaign after the couple allegedly displayed ‘an excessive amount of [domestic violence] signs which are not being handled by the network appropriately’.

It comes after Bryce recently shocked viewers when he changed his mind about whether he wanted to stay with Melissa during a commitment ceremony.

He also made rude comments about her appearance and complained about her eye colour, leaving her in tears on the show.

Married At First Sight Australia airs on Nine in Australia and on E4 in the UK.