Married At First Sight Australia star Ines Basic has undergone an image overhaul, after splashing out a huge £25,000 on cosmetic procedures.

Fans will recognise Ines from season six of MAFS Australia, which is currently playing out for UK viewers on E4.

She was arguably one of the season’s most controversial stars, following her doomed marriage to Bronson Norrish and her secretly hooking up with another groom Sam Ball.

Season six was originally filmed in Australia in 2019 and since making it on the small screen, Ines has transformed her look.

Opening up on her make-over, she revealed she’s had a whole set of porcelain veneers put in, as well as lip fillers and Botox in both her forehead and around her eyes.

Commenting on her cosmetically-enhanced look, Ines said: ‘When the dentist redid my mouth it changed the alignment and it was sort of like having a jaw reconstruction too.’

‘I also get Botox in masseter muscles [around the jaw], that’s why my face now looks a lot different,’ she told The Sun.

Comparing herself to the UK’s reality stars, Ines claimed her new look is ‘more effortless’. She said: ‘I’ve watched UK shows and they all seem to be crazy blonde girls with fake nail and my look is more effortless.’

As for her, she thinks she’s ‘over reality TV’, slamming Australian shows for being ‘scripted, sh*t and manipulated’ – although, she didn’t rule out potentially starring on a reality TV show based her in the UK.

MAFS fans will be reunited with Ines once more, however, as she is set to appear in an all-stars reunion special that is currently being filmed out in Sydney.

She had almost missed filming due to a cancelled flight, but her appearance was later confirmed. The two-part reunion will see former brides and grooms from Married At First Sight Australia come together once again for a dinner party. 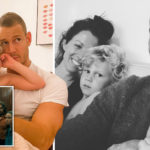