Modern Family fans might have had to blink twice to recognize the show’s star Nolan Gould in his latest photoshoot.

The 22-year-old actor famously played Luke Dunphy for 11 years on the hit ABC sitcom, but the star is all grown up with an impressive gym-honed physique.

It turns out the actor is one of the people who were able to channel their energy into the mission for improved fitness and wellness – and he showcased the results for People magazine.

He told the publication: ‘I spent six months basically on vacation. But I feel like now it’s time to kind of make a decision on where I want to go with my career, and one of the ways you can do that is by changing my look and my mindset.’

Nolan revealed how working with his personal trainer helped him to stay motivated after his regular acting role came to an end in 2020.

He explained: ‘It’s been nice. Especially being unemployed in quarantine, having a reason to get up and stay motivated. It’s been something that’s been very healthy and positive for me in quarantine. It’s really changed my outlook.’

As for his diet? ‘I’m eating so much healthier, even though there’s less of it,’ the star added. ‘What I get is actually really healthy food for you: lean protein, eating as many vegetables as you want, and staying away from things like soda. Nourishing the mind, body, all that. ‘

He continued: ‘And actually, for me the biggest thing was cutting out alcohol, for me, that’s actually been very nice.

‘I feel more clear-headed and have been doing as much writing as possible, being in acting class, taking all the steps I can so when the pandemic’s finally over, hopefully I’ll just be ready to go to work.’

Phil Dunphy would be so proud.

Since Modern Family wrapped, Nolan has starred in Camp alongside Joey King, and also announced plans to create an adult animated TV series.

Modern Family is available to stream on Hulu. 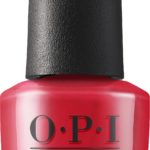 OPI Dropped A Hollywood Collection & Every Shade is Iconic

‘I pick it all the time’: Film extra has ‘third nipple’ lump squeezed from forehead on Dr Pimple Popper