Nick Knowles will be back filming DIY SOS next year (Picture: YouTube/BBC)

Nick Knowles will keep his job on DIY SOS following reports his role was under threat over a Shreddies advert, the BBC has confirmed.

Knowles was at risk of leaving the home makeover show after filming a commercial for the cereal company, according to reports, as it was said the deal threatened to violate the corporation’s rules.

However, the BBC and Knowles, 58, have now confirmed the issue has been resolved and he will return to the series he has hosted since 1999.

He will miss the Children In Need charity special later this year because it coincides with the Shreddies ad campaign but he will be back in 2022.

A joint statement from the BBC and Knowles said: ‘Both Nick and the BBC have resolved the issue recently reported relating to Nick’s commercial agreements and BBC guidelines.

‘With the campaign still running, Nick will step back from the DIY SOS Children In Need special this year but will be back on our screens in 2022.’

Meanwhile, Knowles told The Sun: ‘I have always said that DIY SOS is more than just a presenting job for me, it’s part of me.

‘It has my heart and working for the BBC for over 22 years is something I have never taken for granted.

‘I will continue filming new episodes of DIY SOS over the coming months and will be back on your screens with the purple shirts next year.’

In a separate statement, the BBC added: ‘Nick is an important member of the BBC family and we are pleased that this matter is resolved.

‘We will resume filming DIY SOS as soon as it’s safe to do so and Nick will be back on our screens in 2022.’

Knowles featured in a 30-second Shreddies advert as a builder helping a family.

In the clip, he wore a blue Shreddies hard hat and described himself as Nick ‘get it done’ Knowles. 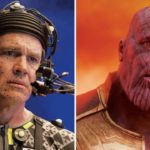 Remembering some classic Marvel villains from over the years