Nicola dna Katja Jones were forced to pull out of the show last year (Picture: PA)

Nicola Adams has spoken about her stint on Strictly Come Dancing, revealing that she ‘no idea’ how she didn’t catch Covid on the show.

The former Olympic boxer was forced to leave the competition early after her partner Katya Jones contracted the virus.

The pair became the first same-sex couple to ever compete on the BBC One programme in 2020, but saw their time together cut short.

Discussing her Strictly experience on The Jonathan Ross Show, Nicola said: ‘[My dance partner] Katya got Covid and then that was it, we were out of the show.

‘I was absolutely gutted. Being a fighter, I’d have preferred to have gone out on my shield, in a dance off. How I never caught the virus I have no idea.’

When asked if she’d have got to the final if she hadn’t been forced to quit, Nicola said: ‘Ah yeah, course. I’m a champ.’ Nicola added: ‘[It was] so sad. Who knows, maybe there’s another dance show I can do.’

Katya and Nicola were forced to isolate for two weeks, and had to drop out during preparation for week four of the competition.

Speaking of her early exit, the athlete previously said in a statement: ‘Hey guys! I’m absolutely devastated my Strictly journey has come to an end so soon. I had so much more to give and so many people to win this for!

‘But I just want to say a huge thank you to Katya for being the best dance partner anyone could ask for. She pushed me way out of my comfort zone and it’s been an incredible experience.’

Meanwhile, the BBC recently stood by Strictly Come Dancing after it received complaints that Katya and Nicola depicted a ‘blatant projection of homosexuality’.

The complaints referred to Katya and Nicola’s return for one last dance in the finale on December 19 after dropping out of the series. 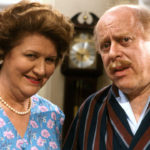 Keeping Up Appearances ‘hit with content warning over offensive language’