Netflix’s Night Stalker is the latest true crime series to grip viewers – with some finding the Richard Ramirez tale so disturbing they admit they found it difficult to watch.

Directed by Tiller Russell, the Ramirez case is dissected in explicit detail, with survivors of the sick serial killer and rapist – including a girl attacked when she was just six – recounting their stories.

After a year-long murder spree that left California in a state of fear, Ramirez was finally pinned down and arrested in August 1985, with a group of residents recognising him, chasing him down and beating him up until the police eventually arrived.

However, in an even sicker twist of fate, Ramirez was quickly glamourised – with admirers of the 29-year-old Satan worshipper treating him like a beloved musician as he appeared unremorseful in court.

Speaking to Metro.co.uk, Russell explained that he wanted to make sure this ‘rock star’ persona was stripped away once and for all, leaving behind the sickening truth of what he had done.

‘What happened is you took this guy who was a sort of invisible Boogey Man who was hunting people throughout the city and the entire city, the entire state was terrorised because anybody could have been the victim.

‘Then, finally, when the boogeyman is identified and unmasked and there ends up being the sort of circus-like aftermath, where he’s in the courtroom suddenly surrounded by groupies and people that are fetishizing him and he becomes the Jim Morrison of serial killers.’

Men and women ranging from the ages of six to 83 were raped, tortured and killed during the one-year killing spree, with Ramirez seemingly choosing his victims at random.

Known for his floppy, wavy hair, Ramirez would wear his sunglasses in court, and at one point even drew a pentagram on his hand and declared: ‘Heil Satan’ as he was taken down.

After he was given the penalty, he told press waiting outside: ‘Big deal. Death always went with the territory. See you in Disneyland.’

More than 30 years on he even became a character in American Horror Story for two seasons – appearing in Hotel (season five) before taking a prominent role as a camp tormentor in season nine, 1984.

But for this new series, Russell wanted to shift the focus off Ramirez and instead give it to the people that deserved it – namely his victims, and the detectives that took him down.

‘It was incredibly important for us not to glamorise or, you know, lionise Ramirez in any way. And part of the way to do that was limiting the amount of screen time that he had,’ Russell said.

‘You just get these little dribs and drabs where you’re seeing evocations of the crime scenes and droplets of these interviews, and then giving the greater screen time to the people that are investigating the case, covering the case, to the victims and survivors, so that their story is the one that gets authored.’

‘We were acutely aware of, and very careful about, not contributing to that rock star vocation,’ Tiller concluded.

‘Because as somebody says in the show, this is somebody that would brutally murder you – not romance you in any way. We wanted to stay true to the horror of that.’ 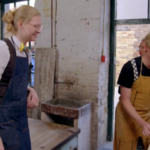 The Great Pottery Throw Down: Who is Rose Schmits, the show’s new technician?

Dancing On Ice 2021: Joe Warren-Plant awkwardly falls on the ice on debut but fans praise him for bouncing back