Outlander fans will be thrilled to know production on season six of the hit Starz show has officially begun.

The past few months of Droughtlander has been tough, to say the least, and many viewers have been left wondering how the series will be able to film the show as originally planned amid Covid-19 restrictions.

Thankfully, there haven’t been any changes to the show’s plans as executive producer Matthew B. Roberts explained how they are making things work.

Speaking to Elle, he stated: ‘I didn’t want me or the staff changing what the story is for Covid. We have a lot of intimate scenes—that’s where we live and breathe.’

Matthew added that ‘testing, testing, testing, testing’ had been the only solution to their filming issue as he continued: ‘We had to figure out how to make sure we tested everybody a million times before they walked onto set and keep that bubble as safe as possible.

‘That was our main focus—making sure everybody feels safe walking onto a set in the studios and locations.’

The producer confirmed that scenes had not been changed or rewritten because of the ongoing pandemic as he added: ‘I don’t know how to write “Covid-friendly scenes,” certainly not an Outlander scene, because we are going to have people next to each other, being emotional—you talk close to people, and that’s where it transfers Covid.

‘We had to figure out, how do we keep Outlander, Outlander? So we wrote the scripts [as originally intended] and dove in with production… We said, “Okay, this scene can’t happen like this. If we did this, this, and this, then we can make it happen.’

This season is all the more special because the show’s lead star Sam Heughan and Caitriona Balfe are also working as producers for the first time.

Matthew told the publication that it was great to see them collaborating with the production team in this way as he explained: ‘They really, really took on the challenge of wanting to learn what it is to be a producer and what goes into it.

It’s something, to them, they’re taking on to broaden who they are in the industry, so when the day comes that there is no Outlander, they can go out and produce their own things.’

He continued: ‘It’s a testimony to wanting to learn and to make yourself not only a better actor but producer, too. The sky’s the limit for both of them. They’re crazy talented.’

Outlander airs on Starz in the US, while seasons 1 to 5 are available to stream on Amazon Prime Video in the UK. 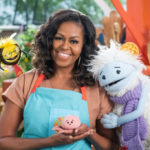 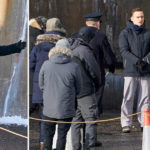