Viewers were left unhappy over the feature – which appeared in an episode on Sunday, January 10 – and lodged complaints with the broadcaster.

Responding to the complaints, a statement from BBC bosses said: ‘The feature on the walking group was part of a programme where the overall theme was to encourage people to make more of their connection with the British countryside during the coming year, including trying to get outdoors more to exercise where possible.

‘For a variety of reasons, as the presenter explained, it has been the case that historically some groups have felt less able than others to take part in outdoor activities such as hiking or mountain walking, so any initiative which seeks to redress that balance is to be welcomed.

‘The walking group in this programme is one such initiative and is a reminder that not only is the beauty of the British countryside there for everyone to appreciate, but that all are welcome to enjoy it and to safeguard its wildlife, landscape, and traditions for the future.’

However, the statement did not go into detail on what had sparked complaints.

The Countryfile segment, presented by Anita Rani, introduced viewers to Rhiane Fatinikun, founder of the Black Girls Hike group – which provides Black women with a safe space to explore the outdoors.

The group was launched in Manchester in 2019, and has spread to the Midlands and London – with members encouraged to try a string of new activities, including climbing and paving.

Speaking about their walking sessions, Anita asked why there are so few Black and Asian people in the countryside – sharing a statistic that members of those communities were ‘half as likely’ to take part in hiking and mountain walking.

‘There’s loads of reasons for it really,’ Rhiane replied. ‘I think it’s where we live. A lot of us tend to live in cities, for example.

‘None of my family does any hiking. We did do sports and we’re utilising outdoor spaces but just not the countryside.

‘I just think it’s really important for us to have that safe space where we can explore the outdoors together, but also in a group where we actually share the same experiences.’

Countryfile airs on Sundays, at 7pm, on BBC One. 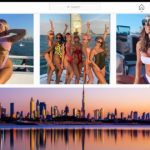