Piers Morgan got into a heated debate with a Good Morning Britain guest over whether employees should be forced to have the coronavirus vaccine, and repeatedly questioned the business owner on whether she was an anti-vaxxer.

The TV presenter spoke to Pimlico Plumbers boss Charlie Mullins who has decided that all his employees must have the Covid-19 vaccine in order to work for him.

During the debate, tech company owner Paris Petgrave said not giving employees the choice to have the vaccine is ‘against human rights’ and discriminatory.

Paris explained: ‘I think it’s just bizarre your approach Charlie. Think about the Government, they employ 1.3 million people within the NHS and they haven’t mandated not one single employee to take that vaccine.

‘In fact there’s no legislation that says the vaccine should be mandated and it’s a violation of our human rights, it’s unethical to discriminate against individuals who work with you if they have a valid reason not to take it.

‘That might be a medical reason, that might be a cultural reason, it might just be apprehensive. At the end of the day, you’re opening yourself up to litigation if you start to discriminate against your employees and mandate vaccinations on them.’

Piers admitted: ‘You both make perfectly valid points but why should I as a customer not have the right to use a company like Pimlico Plumbers that know that they’ve all been vaccinated because I would prefer to do that?’
As Paris said: ‘Whether you take the vaccine or not is a personal choice, it’s not a public choice,’ Susanna Reid hit back: ‘It has public health effects doesn’t it.’
Piers then challenged Paris on her views about the vaccine and said: ‘You are a major employer and you are on national television to talk about vaccines, I don’t think it’s an invasion of your personal liberty to just ask you a simple question, really to establish whether you’re an anti-vaxxer or not.

‘Are you someone who believes in this vaccine or not?’

An upset Paris responded: ‘I think that’s extremely unfair seeing as my mother is extremely sick and the first person in my family to have the vaccine.’

The businesswoman then went on to claim there’s a ‘lack of evidence’ about the vaccine and how it impacts fertility, explaining that she’s in family planning and is concerned that hopeful mothers are being discriminated against for ‘the choice to have children in the next few months’.

However, Dr Hilary Jones then informed Paris that there is ‘no hypothetical mechanism whereby fertility would be affected’ by the vaccine and accused her of ‘scaremongering’.

More than four million people in the UK have received their first dose of the coronavirus vaccine. So far, two vaccines have been approved – Pfizer-BioNTech and Oxford-AstraZeneca. 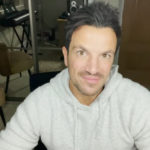 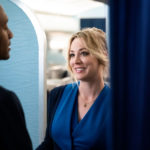