It was time for Morning Glory at RuPaul’s Drag Race UK season 2 with the girls putting their improv skills to the ultimate test.

After showing off their sewing skills in last week’s episode, this week they were guided through the unpredictable world of daytime TV with the help of Lorraine Kelly.

Turns out, this series is just as unpredictable, with queens who looked like they were destined to fail having us gripped, while others who were meant to be made for this challenge falling short.

That’s before we even get to the shenanigans of the work room, were tensions began to rise among the queens and seemingly sworn rivals becoming besties all within the space of an hour!

So… who had us switching off, and who was turning us on?

We would be lying to ourselves if we said this was anything but A’Whorea’s episode – as not only did we see her absolutely shine in the Morning Glory challenge, but she also broke our hearts.

Her breakdown in the confessionals was a particularly difficult watch to be honest, because unlike previous tears on the show, it felt like a genuine moment of vulnerability that perhaps even caught her off-guard. And in someone that clearly prides herself in being unshakeable, we couldn’t help but feel for her.

But emotional moments aside, she was also hilarious, and it was nice to see her bond so well with Tia, especially as the absolutely bonkers Essex girl money saving experts. Out of everyone, it’s her performance we remember most vividly, and not just because she got her boobs out for Lorraine Kelly.

Throw in her absolutely killer runway look and we honestly think she should’ve won. She’s our winner of the week anyway.

Bimini Bon Boulash is continuing to surprise us and we’re absolutely loving being along for the ride.

Her Brexit Bun was comedy gold in the mini challenge, and as the slut-dropping boozy host during the main task, she knew that attention to detail would be what would put her above the rest.

As for her monster mash runway, we personally loved to see the devil Pamela Anderson look ‘except she won’t go to hell because she’s a vegan’.

She’s yet to clinch the win, but if she keeps up this kind of trajectory she can’t be that far off one.

Lawrence is now the first queen to win two RuPeter badges, and is continuing to prove to be the one to beat, at least in Ru’s eyes.

In the main challenge, she definitely has what it takes to be a presenter, and she kind of helped carry Ellie through (plus her attempting to ride a kids bike just to immediately break it was hilarious).

Her Leatherface-inspired runway look was pretty cool, with particular snaps for having her own creepy, carved out face hanging off her arm.

However, we’re not sure if it’s because of the edit, her consistent high praise or her loud and lairy energy beginning to grate, but it seems like the queens are beginning to lose their patience with her a little.

After falling into the bottom two last week, Tayce knew she had to pull it out of the bag this week, and thankfully this challenge played to her strengths.

In Morning Glory, she knew to work as part of a team instead of trying to hog the limelight, and in letting A’Whorea fully go for it while being the straight man of the piece (how dare we?!) the pair became all the more stronger for it.

If it was a dual challenge, we’re sure they’re the ones that would’ve taken it.

This was also by far Tia’s best runway, looking absolutely gorgeous as a skeleton Medusa – and more importantly, it was away from the comedy value we know her for, and lined-up with the judges’ calls to be more glam.

This was a strong week for Tia.

By this point we’re pretty sure Tayce could wear a bin bag down the runway and sell it like a couture gown. In those stakes, she is unbeatable.

Her confessionals are also providing so many GIFable comments even the internet can’t keep up, with this week no exception as she talks about ‘William’ Schofield and declaring Lorraine ‘The Beyonce of daytime telly’.

The boozy host scene was also a success, and she worked well with Bimini – solid job all in.

We wish she played into the monster mash-up theme a little more though. Even though her Frankenstein look was gorgeous (obvs), there was nothing to play with there.

The criticism the judges gave A’Whorea is valid with Tayce too – she doesn’t want to not be beautiful, and it’s that resistance that could cost her the crown.

We felt for Sister Sister this week, she was completely railroaded by Veronica in the challenge and then was kind of left out to dry. But even without Veronica there, we don’t think she could’ve saved that concept – because they didn’t have one.

Her runway mummy look, like the judges said, was a little too ‘been there, done that’, and that put her in the bottom over her scene partner.

But on a completely separate level and away from the competition of it all, she was beginning to stand out more this week and we were really starting to enjoy her. In the confessionals and workroom, she had interesting and hilarious contributions and she stood up for herself without being overly rude about it.

It was sad to hear that despite her outlandish drag she is hesitant to stand out, which may explain why she’s stood back in previous weeks. We hope the show brings her out of her shell a bit because when she did let go we loved her.

Veronica was definitely ‘worst team player’ this episode, and we think she knew it.

Starting off on rocky footing in the Fake Off challenge, it was all downhill on Morning Glory, with her goth party planner having no concept besides ‘be miserable and rude. The End.’

We know she is a really capable queen and she’s proved it a number of times, so we’re disappointed that she thought winging it would work, even though by her own admission improv isn’t her strong suit and previous seasons proving ‘just going with it’ doesn’t work.

Her character’s ‘screw you all’ attitude then seemed to stick, and while it might have been a combination of feeling defensive over being in the bottom and having the source of support being from usually sharp-tongued A’Whorea, her rant during deliberations was uncalled for and rude.

Saying that, we were obsessed with this pig medusa look and couldn’t take our eyes off her on the runway – it was a work of art and our look of the night, and so for that we’ve bumped her up the rankings.

You’ve got to give Ellie Diamond credit for her hilariously awkward moment with RuPaul about not referring to her in a Scottish accent. It was so beautifully tone deaf and meant with zero malice but the reaction just made you want to cringe.

But apart from that there were no particularly remarkable moments from her. In the challenge she looked cute but it was Lawrence that stood out in their pairing, and she didn’t seem to do much.

Killllled the runway once again thought with that goblin look, and managed to get a classic throwback from Michelle as a result.

But we don’t think it was fair she spoke over Tia and made Veronica believe everyone wanted her out. It seemed a bit pot-stirry taking it that out of context.

She had a solid week but as someone with this much talent and skill with a sewing needle, she’s the one that we’re needing to step up at this point because apart from her standout runway on episode one we feel like we’ve seen her.

This week really knocked the wind out of Ginny’s sails, and while yes, she wasn’t the strongest performer, it wasn’t hard to see that she was beginning to check out of the competition.

By the time she made it back to the work room for deliberations, she said it herself, she was closed for business, and sometimes it’s better to just walk away.

We’re at least glad she made a memorable moment of her lip-sync though, and went out on her own terms.

We weren’t ready to see Ginny leave, but it was obvious after week three’s efforts to be more glam, and falling short in the challenge she thought was hers this week, she just needed to leave.

It’s a shame but we admire it. 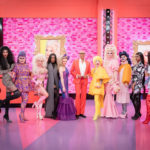 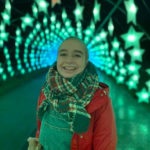 As a genderqueer person, I love watching Ru Paul’s Drag Race UK with my dad