It was queen vs queen on this week’s RuPaul’s Drag Race UK – with Ru pitting best buds against each other in a massive ‘Who Wore It Best?’- athon.

After Cherry Valentine sashay-ed away last week, we’re down to the final 10, and in a moment sure to shock fans, it was two favourites that had to battle it out in the bottom two.

We’ll be honest, we thought that the judges’ decisions were a teensy bit all over the shop this week – but we’ll get to that and again, we’re not the pros here.

So who do we think gave America’s Next Top Model a run for their money, and who fell flat on the runway?

We can barely keep up with these queens as they’re all so fierce! But here’s our rankings from top to bottom.

Bimini was a much needed source of comfort for Ginny this episode, and spoke about being non-binary in a clear and succinct way to the cameras which should be applauded.

And that spider web, navy goth, high fashion runway look was everything we needed and more. May have been our favourite look on the runway this week – there, we said it.

Falling into the bottom back in week one really lit a fire under that peachy bum of hers, because she seems to be getting stronger every episode.

She didn’t feature prominently this week, she made every second count and we loved her – we need a Bimini in our lives.

Lawrence officially earned the title of ‘s**t-stirrer of the week’ after fully grassing up A’Whorea and Tayce to Ru without shame. Hilariously awkward and iconic.

But by the looks of it, she’s not as willing to take it as much as she dished it out, which isn’t cute.

On the runway, Lawrence looked like an expensive divorcee who had been spending the past 20 years of her life acquiring toyboys after marrying rich, which is to say she was absolutely fab.

It’s very clear that Ru has got her eye on Lawrence and maybe even has her as a favourite to win the crown already. Hell, Ru’s not exactly trying to hide it.

That puts Lawrence in a really strong position in the competition, but if she falls, she’s going to fall hard if she’s not careful.

It may have been because she was more comfortable in the challenge, or was more settled in the competition, but A’Whorea’s nice side came out this episode and she was much more enjoyable for it.

That was until that absolutely savage commentary on Tia after the runway and then she lost us again. We know it’s frustrating to see amazing queens leave, but that’s hardly Tia’s fault, and she seems to have had it out for her since day one.

But being nice also sadly bit her in the bum – as the team had a point. Spending so much time focusing on helping Tayce cost her time on her own outfit and, potentially, the win.

A’Whorea definitely won between the two looks with Tayce, but to lose a challenge that was seemingly in the bag for her to win overall, you could tell it stung when Ru didn’t call out her name.

Tayce appears to be the chink in A’Whorea’s fabulously styled armour, and she might need to ‘schnap out of it’ or lose the competition.

You’ve got to hand it to Ginny for taking Ru’s advice and stepping out of her comfort zone this week – going more beauty than comedy, even if it didn’t quite work out. This was her week really.

Ginny really went raw this episode with blunt discussions on self-confidence, gender identity and upbringing really tugging at your heartstrings. It explains a lot about the comedy character they’ve created.

In the challenge, Ginny obviously wasn’t comfortable but she tried, and still managed to keep some of that lemony zest in the outfit. A sexier side to her was pretty nice to see, and it was clear getting complimented in that way boosted her self-esteem in a way she wasn’t expecting.

But a sewer Ginny is not, and she should’ve maybe been penalised a little more for essentially sticking two pieces of fabric around her and calling it a day. Just that cinch on her waist at the judges’ request made such a difference.

Ultimately we’re glad Ginny stays to see another week – we like Ginny. But in terms of the challenge, she was the weakest by far and we’re kind of shocked Ru saved her from the bottom two.

Veronica looked gorgeous on the runway, and her garment was better constructed than opponent Tia’s, so she deserved the win.

But that bralet top was wonky, girl – and without some padding on her chest to potentially balance it out, it was really obvious.

There’s something about Veronica that we are so endeared to though, and we think it comes down to the confessionals and her interaction with the other queens.

She’s here to win and isn’t messing about – and while we think her final look could’ve been a bit stronger, she’s becoming a frontrunner.

Tayce has some powerful and useful friends and that definitely came in handy this week with the challenge.

Her close connection to A’Whorea is sweet but she would’ve been lost without her pal in the workroom. It’s a discredit to say that Tayce did nothing though, because that concept was entirely hers.

Ultimately Tayce is an ideas person that lacked the know-how herself to put it into practice the way A’Whorea does. We relate. So why not ask a pal?

Her commentary’s are also gold – with her, Tia and Lawrence taking up most of that chat time with the cameras.

We’re going to need her to step up now though to prove herself more than a look queen in this competition. Otherwise her days are numbered.

Sister Sister really was a true sister to Ginny this episode by lending her hip pads and guiding her out of her comfort zone.

Whereas the past couple of weeks she disappeared among the pack, this episode we really began to know more about her – and we liked what we saw.

We still aren’t quite buying the ‘I’m kooky’ side of things, but her look was solid, her position within the group was more defined, and her character was beginning to come out.

Taking make-up inspo from drag queen Juno Birch, Sister’s blue face went beautifully against the pink outfit and showed us she was pretty darn capable with a hot glue gun and a sewing machine.

It was up there as one of our fave looks of the night – but when we know that paint is so distinctly known to be Juno’s look, we can’t help but feel a teensy bit cheated and missing the Sister Sister of it all.

Sister might be the queen that keeps rising throughout the competition – and they have a habit of peaking at the finale. Let’s see.

Ellie proved she had balls this week… literally, she practically got them out in front of Ru and Jodie Harsh during that limbo challenge, and you have to applaud a queen with that kind of nerve!

She’s proven week after week she has skills as a seamstress too – so that’s why we were a little underwhelmed with her embellished body suit in this week’s challenge.

Granted there was a time restraint, but it felt like something we’d seen before from her and while it was definitely fabulous, it was missing a bit of wow factor.

And once again, Ellie is somewhat absent/non-prominent in any work room chats and confessional moments.

Our girl is cruising that Pacific Coastal Highway and needs to start standing out.

We know she called herself out, but being self-aware doesn’t excuse the fact that not being able to sew on a show that literally requires it is a bit unforgivable.

Saying that, we think her 80s-ish outfit on the runway was pretty cute all in -even if not the most elaborate of costumes. It should’ve at least been safe.

Her tears at the judges critiques over her being able to be more fashion was also kind of suprising- you’re a beaut, girl. Own it.

Self-confidence and assurance are important qualities to have in life – but this challenge proved that at times you need to have the moxy to match it.

Asttina sadly, didn’t have it this week, with her anime, Sailor Moon fantasy reading more as an off-duty ice skater. Plus it was too simple – with next to no embellishments at all.

It’s sad that Asttina wanted to be seen as more than legs and body, only to have that be the one thing she’s complimented on by the judges – especially Jourdan Dunn.

We’re honestly gutted that she had to go, but this is a strong group of queens and this proves that this season just one bad week is all it takes. 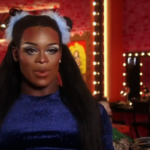 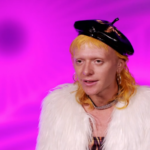