Frock Destroyers, the girl group formed during the first season of RuPaul’s Drag Race UK, have announced the release of their debut album, which they hope will ‘put smiles on people’s faces’ in the lead-up to the festive season.

Not only did Frock Destroyers win over Drag Race UK fans, but their alternative version of MNEK’s song Break Up (Bye Bye) became the first song by a drag group to reach the UK’s top 10 chart.

Having toured as a group following their appearance on the BBC Three show, Frock Destroyers have now taken their music careers to the next level, as they prepare to launch their first album, titled Frock4Life.

In addition to Break Up (Bye Bye), the album released via World of Wonder Records also features tracks including Frockmatica, Her Majesty, Big Ben and Fame Whore.

Baga, who ended RuPaul’s Drag Race UK in third place, said she ‘can’t believe’ the band is releasing an album.

‘We’ve worked so hard and we’ve spent nearly a year on it all in lockdown and it’s FINALLY HAPPENING,’ Baga said.

‘It’s going to be amazing; we love all the songs and I think especially coming closer to Christmas time, we all need a bit of cheer and want to put smiles on people’s faces.’

The drag queen thanked Frock Destroyer fans for being ‘so amazing’, adding: ‘We’re going to take over the world.’

Divina, who finished the competition as runner-up, drew comparisons to other British pop groups when describing the new album, stating: ‘It’s a bit of a Steps going to dinner with Little Mix hosted by three drag queens.’

‘There are proper bangers with some tongue in cheek foolishness and great vocals. I cannot wait for everyone to hear it,’ she said.

Blu, who came in fifth place last year, looked back on when the group was first formed, saying that it was ‘like catching lightning in a bottle’ and that it ‘showed the world what British drag is capable of’.

‘We want to build on that iconic moment and take over the music industry as the slaggy drag-band that we are!’ she said.

‘Baga, Davina and myself were handed a golden opportunity to frock destroy everyone with new music and you better believe this album will leave everyone despunked and begging for more!’

Singer-songwriter and producer Brett McLaughlin, otherwise known as Leland, is executive producer and songwriter on the album, having previously worked with stars including Ariana Grande, Selena Gomez and Troye Sivan.

Frock4Life will be available on all music streaming platforms on 11th December, from World of Wonder Records. You can check out single Her Majesty here and pre-order the album here. 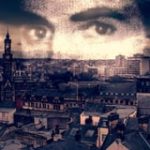