RuPaul’s Drag Race UK delivered a shocker of an elimination this week – with Ginny Lemon quitting and walking off mid lip-sync.

Ginny found herself in the bottom two against Sister Sister following the Morning Glory challenge, where she was tasked with being the weather girl for the fictional programme.

For the monster mash runway theme, she turned up in toxic green, with guest judge Lorraine Kelly saying she resembled Kate Bush in her walk.

RuPaul subsequently told her: ‘I thought that the character development was there, but the problem was that it was one note continuously throughout the whole bit. What I’m looking for is to take it to that next level.’

After becoming deflated with the competition, Ginny decided to say goodbye… but was going to do it memorably.

Ahead of the performance, Ginny said in the confessionals: ‘I’m gonna f**k it up and be punk and do what I always do – and that’s my own thing.’

As the song You Keep Me Hangin’ On by Kim Wilde started playing, Ginny Lemon sashayed away off the stage and didn’t come back, leaving Sister safe and lip-syncing alone.

Speaking after her exit, Ginny said: ‘I was up against my Sister Sister and I just couldn’t. I love her too much. I’m ready to go home babs, I’m knackered.

In her final goodbye to the remaining eight queens, Ginny wrote on the mirror: ‘Witches unite. Fancy A Slice.’

Viewers were shocked but thought Ginny Lemon’s exit was iconic, and shared their love for her on Twitter.

While her time on the show may be over, Ginny isn’t out of the spotlight just yet – saying she had big plans in her future.

‘I will now take over the world become a household name and obtain a damehood, all whilst wearing flats.’

Noone wears Crocs quite like you, Ginny. We can’t wait to see it. 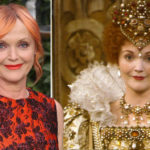 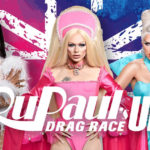