Selling Sunset star Maya Vander has confirmed that she will be back for season four despite starting her own brokerage in Miami.

Fans of the Netflix reality series had wondered if Maya, 31, would leave the show when she announced the launch of the Maya Vander Group.

It seemed as though she might have parted ways from Jason Oppenheim at the Oppenheim Group in Los Angeles but fortunately, the witty cast member will return… if season four is given the green light by Netflix, of course.

Speaking to Metro.co.uk, Maya explained: ‘If we do season four which we’re waiting to hear about – and I have a good feeling – then I’m going to be part of it. I don’t know when we’re going to film or when it’s going to happen because we’re in a crazy situation but I think if we get another season, things need to be safe.

‘We shall see because a lot of things are going on, I’m excited to focus in Miami full-time. I probably will only be dealing with a few clients in LA that are worth me travelling and if it’s lucrative.’

Maya has big plans for her company and teased: ‘I’m still under brokerage in Florida and have launched my own group with the expectation of having a couple of agents. I’ve started to get a lot of clients in Miami and I’m only one person.

‘I’m studying for it still but the company I’m with in Florida allows you to brand yourself so that’s what I’m focusing on. I think it’s going to be great but the market here is really hard.’

In season three, Maya was relatively absent due to having her second baby with husband Aiden and began appearing via Facetime while in Miami, Florida where her family lives.

Reflecting on the last set of episodes, the real estate broker said: ‘I do feel I got the least screen time in the last season but I don’t know what I’m going to do in the next one because what drama am I going to provide? I like all the girls and I just want to avoid it. I’ll just do real estate and somehow try to be part of it.’

Over the past couple of years, Maya’s life has been a tale of two cities with her job in LA and family in Miami, particularly when she and Aiden started their family in 2018. Although it’ll be a ‘logistical challenge’ Maya’s confident she’ll find a solution.

However she admitted: ‘It’s tough, when I moved to film the show in the second and third season, my first baby was only four months so it was very difficult on my husband to not see his newborn baby everyday.

‘It was challenging but we have a great marriage, great communication and we made it work. He was doing a lot of travelling so it wasn’t easy and there were times I was sitting by myself in LA with my baby and I really missed home and being with my husband and raising our baby together rather than doing long distance.’

Maya has found it difficult to keep up with the rest of the cast, including Chrishell Stause and Mary Fitzgerald, due to the coronavirus pandemic.

Referring to the dramatic events of the season three finale, the reality star explained: ‘I talk to Davina [Portratz] a lot, I like her and think she’s great.

‘Whatever happened in the last scene, the conversation was longer and the way they edit things make it look very dramatic and it was indeed very emotional for Chrishell because of what happened and it was very fresh.

‘Time goes by and Chrishell is in a new relationship and I’m very happy and excited for her. I think her and Davina are cordial, they don’t hate each other. Maybe they don’t talk everyday but I’m sure when we get back to the office, things will be much more relaxed and calm and I think time helps with everything.

‘I can’t wait to spend time with them.’ 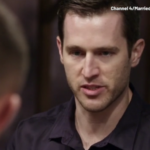 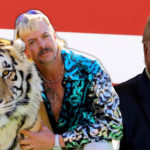