Sex Education will be a little different when season 3 arrives (Picture: Netflix)

Sex Education is set to have a very different feel when season 3 rolls around thanks to coronavirus filming restrictions.

The acclaimed show often sees big ensemble cast scenes, like Aimee and the girls getting on the bus after her sexual assault, and to house parties, however, it seems as though the new series will focus on more separate storylines due to Covid-19.

Teasing a fresh dynamic, Eric star Ncuti Gatwa opened up about how the new scenes were filmed.

‘Everyone was so individual this season,’ he told cast member Aimee Lou Wood on Bafta’s Instagram page ahead of this year’s TV awards.

‘We were so out of sequence. I’m very much looking forward to seeing [it]… I’ve only read everyone else’s storylines.

‘For me, that’s always the most exciting part of a production, is when you can look at the end product and look at everyone else’s storylines.’

Speaking about his favourite scenes to film, Ncuti added: ‘I think any time you see Eric with his family or in his culture is always nice. It’s always nice to be on set when the majority of people here are black.

‘It feels nice because I don’t feel like a minority and just to be occupying that space as Black actors on a big platform on a Netflix show, those are the scenes that I love as well. A lot.’

Jason Isaac has also joined the show’s stellar line-up as the – more successful – brother of the disgraced headteacher.

In January, Asa Butterfield, who plays Otis, shed some insight into what fans should expect.

‘There’s a bit of a time-jump since the season two cliffhanger,’ he told the Guardian.

‘Otis is back at school but he’s got different things on his plate. He’s grown up a bit and become slightly more sassy. It’s been fun to portray his newfound charisma. Don’t worry, though, he’s still tragically awkward too.’ Yes, Ariana Grande Wore A Bridal Ponytail To Her Wedding 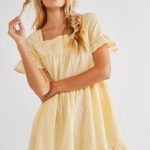 Summer Dress Trends We Keep Adding to Our Shopping Baskets