Melanie C has been named as the new judge on The Voice Kids following Paloma Faith’s exit.

The Spice Girl joins Danny Jones, will.i.am and reigning champion Pixie Lott in the upcoming new series as they search for the next generation of singing talent begins, while Emma Willis is back to host the series.

Airing during the festive period, this year’s series of The Voice Kids is a Christmas television event not to be missed.

An array of singers, aged seven to 14, will take to the stage in a bid to impress the star coaching panel and get those big red chairs turning.

‘I’ve always been a huge fan of The Voice so I am super excited to be a coach on The Voice Kids this year,’ Melanie enthused. ‘I can’t wait to get in one of those big red chairs and Spice things up!’

Meanwhile, Danny added: ‘It’s great to be getting going on another series of The Voice Kids and I’m chuffed to have Melanie C joining the gang.

‘Every year when I think the talent can’t be topped I find myself blown away by the new up and coming kids. I’m looking forward to discovering some brand new little superstars, it’s also a mission of mine to catch up with Pixie’s winning streak.’

Melanie joins the panel this year following Paloma’s recent announcement that due to the imminent arrival of her second child she will not be returning this series.

The singer is expecting her second child with boyfriend Leyman Lahcine and her pregnancy has been deemed high-risk.

Paloma and her partner Leyman, who are already parents to a three-year-old daughter, have been together since 2013.

The Voice Kids will return to ITV later this year. 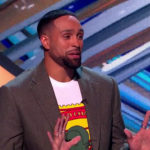