Talk show host Stephen Colbert revealed he had been moved to tears when he watched Joe Biden’s Inauguration on Wednesday.

The Late Show With Stephen Colbert host admitted he felt ‘enormous relief’ as he was joined by his fellow late-night hosts in saying a gleeful goodbye to Donald Trump.

The now-former president provided plenty of material for the late-night shows during his tumultuous four years in office, which officially came to an end when Joe Biden and Kamala Harris were sworn into office.

Colbert, Jimmy Kimmel and Jimmy Fallon all addressed the end of an era during their opening monologues.

Colbert, broadcasting live, told viewers: ‘You did it. You survived the last four years and your reward – a shiny new, old president. Good old Joe. The inauguration was a joyful occasion.

‘Like I do at most happy things, I cried a lot. It was extremely emotional, and not entirely in the way that I expected, because I have to tell you, I have zero gloat in me.’

He continued: ‘There is no end zone dance here. What I feel is enormous relief. Watching the inauguration today I recognised just how worried I’ve been for my country.

‘But we’ve all been too deep in it for the last four years to truly realize what we were deeply in. It’s like we’ve been on a ship that’s been in a storm for four years and we just stepped on to dry land.’

Colbert said the US has been governed by ‘denial and self-delusion’ during the pandemic because ‘everything was a sales job’.

Praising the safety precautions at the inauguration, he added: ‘What we saw today was the opposite of gas-lighting. Today we were reality boarded, and I am here for it.’

Jimmy Kimmel Live! opened with footage of New Year’s Eve celebrations from around the world made to look like a response to Mr Trump’s departure from the White House.

‘I don’t know about America yet, but I feel great again,’ Kimmel said as he riffed on Mr Trump’s slogan.

He compared getting rid of Mr Trump to receiving good news from a doctor and said: ‘I have to imagine this is what it feels like when the oncologist calls and tells you the tumour is benign.’

He said: ‘Today this country showed the world there is no MyPillow large enough to smother our democracy.’

And he compared the scenes during Wednesday’s inauguration – which featured performances from Lady Gaga and Jennifer Lopez – to the chaos two weeks ago when supporters of Mr Trump raided the Capitol.

Kimmel said: ‘Two weeks ago a bunch of dangerous imbeciles with Donald Trump flags tried to overthrow our government. Today, on that very same spot, we had the national anthem sung by Lady Gaga.’

Kimmel said seeing former presidents Bill Clinton, George W Bush and Barack Obama join Mr Biden was like ‘when all the Avengers came back together to beat Thanos’.

Kimmel said: ‘The bar for Joe Biden is low and it’s going to be an adjustment to have a president who is presidential.

‘There is a feeling in the air of celebration and joy so we say goodbye to Donald Trump not with venom, not with scorn, but with optimism, jubilance and celebration.’

Fallon introduced his The Tonight Show, which is more focussed on entertainment than its rivals, by saying: ‘Joe Biden, our nation turns its bleary eyes to you.’

He said the US is more divided than ever, quipping ‘we don’t even have peace among the cast of Sex And The City’.

Fallon turned his attention to ‘the elephant that wasn’t in the room’ Mr Trump, joking his farewell claim that ‘we will be back in some form’ sounded like it was written by Harry Potter villain Lord Voldemort. 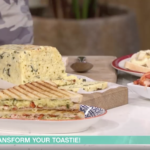 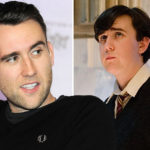 Matthew Lewis says it’s ‘painful’ to watch himself as Neville Longbottom in Harry Potter: ‘It’s easier when I can play someone completely different’