Maisie Smith has had a hard time of it on Strictly Come Dancing recently, ending up in the dreaded dance-off for two weeks running.

Despite smashing her routines with partner Gorka Marquez, the EastEnders actress has found herself in the bottom, with the judging panel choosing to save her.

The EastEnders actress’ mum, Julia, has insisted that she is ‘nervous and vulnerable’ on the show, and missing the ‘comfort’ of having her family around her.

Speaking about seeing the 19-year-old struggle, she explained that she can ‘feel’ her daughter’s vulnerability, giving her sleepless nights.

‘It’s seeing my daughter upset and vulnerable…I want to grab her. In the early days me and my husband were allowed to sit in the audience …and she would look over and we would give her a big thumbs-up and she said she misses that.

‘Knowing that we’re nowhere near, I feel her vulnerability, so it has been quite tearful. The last couple of weekends have been …you know, I didn’t sleep on Sunday night. I was up for three hours just pacing around in the night, thinking, “How can I help her?”’

Maisie has been in the public eye since she was a young child, first stepping foot on EastEnders as Tiffany when she was just six years old.

She also had a brief appearance in The Other Boleyn Girl, with Scarlett Johansson, Natalie Portman and Eric Bana.

Julia also added that the star had found it difficult to be herself on the series, as she is so used to ‘hiding behind’ her Tiffany persona.

Maisie ended up in the bottom two against Max George earlier this month, and ‘burst into tears’ when the judges opted to save her.

Chatting to OK! Magazine, she said: ‘Some people have had it in their heads that because I’m a good dancer that I would be safe every week. But that’s so not the case.

‘It was so, so scary. It wasn’t a nice feeling at all. You didn’t see it on camera, but as soon as I was saved, I just burst into tears. It knocked my confidence. I’ve been trying so hard – we all have. But I’ve had to keep reminding myself not to take it so personally.’

‘It happened to Jamie Laing in the first week, and he did so well after that. But honestly, when I heard my name, it was the scariest feeling. I’ve never been in such a scary situation.’

The star found herself in the bottom once more last week, against Caroline Quentin.

How will she fare this evening?

Strictly Come Dancing continues on Saturday, at 7.15pm, on BBC One. 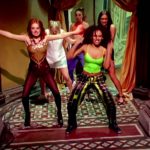