Caroline Quentin has defended licking Strictly Come Dancing partner Johannes Radebe during a routine, revealing that it was ‘consensual’.

The Men Behaving Badly actress, 60, was voted off Strictly after the dance – which was a Cha Cha – in which she licked her professional dancing partner’s arm.

The move raised eyebrows from fans who took to Twitter to voice their opinions – which was the first time Caroline realised it was ‘a problem’.

She explained to The Guardian: ‘Johannes came off, because he’s always looking at Twitter, and he went: “Oh God.”

Caroline revealed: ‘Let me just say that Johannes was completely complicit. I am not a licker. I did not take it upon myself to lick him.

‘We talked about it. It was consensual licking. It was meant to be funny. So get a sense of humour or f**k off. One or the other. I don’t care.’

Caroline also claimed she felt ‘institutionalised by Strictly, adding: ‘They all refer to Strictly as a well-oiled machine.

‘It has to be. But, within that, I think it can become a little… insensitive to individuals.’

She also previously joked that she hadn’t lost weight during the show, saying: ‘I don’t think it has quite changed my life.

‘[Strictly] hasn’t really changed me physically that much. I am a bit stronger, but all the rumours of losing four stone in four days are absolutely untrue.

‘I have worked over five weeks and I have lost a pound and a half. I am stunned. I am actually stunned…

‘I am joking really but I am quite surprised because I am moving about from dawn ’til dusk. Has it changed my life in that way? Not really, no.’

Although Caroline didn’t make it to the final, comedian Bill Bailey became the show’s oldest contestant to lift the glitterball trophy, winning the show at the age of 56. 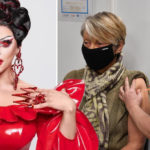