Sue Perkins has made her sentiments regarding Matt Hancock’s recent Good Morning Britain interview perfectly clear, describing him as an ‘utter smirking d**k’ over comments he made about free school meals.

Earlier this week, the Health Secretary made an appearance on Good Morning Britain, where he spoke to presenters Piers Morgan and Susanna Reid about free school meals being distributed to children across the nation during lockdown.

When Piers asked the politician how he feels about free school meals during lockdown – having previously voted against them – he seemed fairly uncomfortable, responding: ‘Well… because… the reason I’m glad now is because we’ve been able to sort that out and put it in place.’

During the latest episode of Channel 4’s The Last Leg, comedian Sue strongly criticised the way the Health Secretary addressed the situation on the morning talk show.

‘At the end of that clip, he goes, “Well, I’d like to describe my own words, my own feelings”,’ Sue said.

‘In the spirit of that, I’d like to describe Matt Hancock in the way that best represents my feelings – an utter, smirking d***k.’

The former Great British Bake Off presenter said that she found it ‘totally inappropriate’ for the Secretary of State to ‘sit in an oxblood toilet – which is what it looks like he’s broadcasting from – smiling as someone basically asks him to be humble because he has lied and disseminated nonsense’.

‘And he has allowed kids to go without food,’ she stated.

‘Of course that’s what businesses do, they make huge profits out of other people’s suffering. But really, this should be in the hands of public health and no one should go hungry.

‘We’re the fifth largest economy in the world, and the response to that is, “Put your hands up, I’ve done something wrong.” Not sit there grinning like a Cheshire cat and refuse to own it. It’s awful.’

Fellow The Last Leg guest Munya Chawawa remarked on the politician’s frequent use of the word ‘glad’ when describing how he felt about free school meals.

‘Matt Hancock is the kind of guy who’d have a questionnaire sat in front of him: “Are you experiencing symptoms of Covid: Yes. No. Prefer Not To Say.” And he adds a box saying: “Glad.”’

Parents of children who qualify for free school meals have recently been sharing pictures online of small quantities of food they received that were supposed to last for 10 days.

The government later made a U-turn and confirmed that £15 meal vouchers would be reinstated as of Monday.

Kelly Clarkson thanks Jennifer Love Hewitt for being kind to her during American Idol: ‘Everyone was so rude to us’ 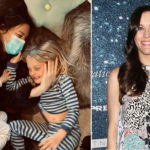 Liv Tyler reveals she had Covid: ‘Being isolated in a room alone for 10 days is trippy to say the least’