The Bay season two star Sharon Small has opened up about relating to the young actor who plays her on-screen son in the ITV drama, commending him on how ‘seriously’ he took his role.

In the second season of The Bay, Sharon is introduced as newcomer Rose Marshbrook, a woman impacted by a murder in Morecambe, which is being investigated by police detectives Lisa Armstrong (Morven Christie), Med Kharim (Taheen Modak) and Tony Manning (Daniel Ryan).

One would imagine that for any child actor, appearing in a TV drama about a murder would be a fairly daunting prospect, especially when starring alongside household names such as James Cosmo (as Bill Bradwell) and Stephen Tompkinson (as Stephen Marshbrook).

During a recent conversation with Metro.co.uk, Sharon praised Leo for taking the role in his stride, explaining that he ‘did a good job of really switching, compartmentalising and focusing’.

‘There are moments when every actor… I think he had a little moment where he was like, “I’m not getting it,” and I was just like, “It’s fine,”’ the Scottish actor said. ‘He really took it seriously.’

Sharon explained that she feels very strongly that young actors are able to ‘switch off’ in between scenes, describing Leo as ‘really good fun’.

‘You’ve got to allow that to come out so that when you switch off it’s back to noise and fun and freedom,’ she said.

Sharon, 53, has two children of her own, including a son of a similar age to Leo, which she said helped her forge a connection with him.

‘We just chatted and listened because he’s really chatty. As an actor it’s really important to just be open to that because that is the actor’s expression as well,’ the Law & Order: UK star stated.

‘Sometimes you can tell children to be quiet or don’t be so nosy or whatever. I go bring it on, I want to hear you. I really enjoyed it.

‘I’ve got a son of a similar age so I knew a lot of the references, lots of things we could have in common, and he’s just really good fun.’

Leo also proved to be an especially helpful co-star for Sharon, as she said that hearing him talk helped her fine-tune her northern accent.

‘The little boy Leo, who plays my son, he’s really from there, so I would just listen to him quite a lot as well because he chats a lot,’ she recollected.

Curious about how Rose and Oliver tie into the latest murder mystery gripping the residents of Morecambe? You’ll have to tune in tonight to find out more.

The Bay season two starts tonight at 9pm on ITV. 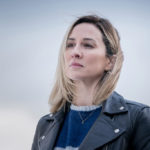 What happened at the end of The Bay season 1?