We’re getting ready for the newest season of Channel 4’s The Circle – and the new players have a lot of tricks up their sleeves in a bid to be popular.

The addictive social media game, hosted by Emma Willis, is about to open up its doors for a new civilian team, including a former star of Gladiators and a father/daughter duo who reckon they have what it takes to charm the others.

Prove unpopular and you’re out.

Want to know a few secrets of the cast’s lives outside of the reality show?

Here’s some essential secrets the players are keeping from each other – and why they entered the game in the first place.

Andy, a 34-year-old company director, is going in as himself in order to prove to his children you don’t need to lie to get ahead.

This ethical standpoint seems to be something that he carries throughout his working life, earning himself a nickname.

‘Colleagues have called me The Priest because I value morality above anything else,’ he revealed.

In a bid to help people during Covid, he also launched a YouTube channel with financial tips but said: ‘They are by no means viral, they’re very niche.’

He’s also a fan of Piers Morgan on social media, and added: ‘I don’t agree with everything he says but he is who he is.

‘I value that a lot, when you are what you say on the tin.’

‘I have ulcerative colitis and had lifesaving surgery where they removed my large bowel at 18 but I didn’t let it affect my life or career, it only pushed me further,’ he said.

‘I think if you meet me you wouldn’t think that by 22 I was the youngest general manager at a football stadium in Europe at a premier league club and also went on to run other high profile stadiums and events.

‘By 30 I ran one of the largest E sports events in Europe. By 32 I was one of the youngest listed board directors on an Aim listed business, and was the chairman of one of the world’s largest model brick building company.’

Billy, 19, has already ruled out looking for love online, and believes it’s impossible to find ‘The One’ through the apps.

‘No chance. No way. Obviously, people find people on all these apps and
that’s fair enough, good luck to you, but I don’t think it’s possible at all,’ he said.

‘I’m definitely more of a face-to-face kind of person.’

Though saying that – he’s definitely up for a bit of flirting to get ahead in The Circle.

‘In the back of my mind I’ll be thinking this might be some 50-year-old bloke. I know for a fact that I will be sitting there chatting away and it’s going to be on TV that I’m chatting to someone who’s laughing their head off at me, because I’ve fallen right into their plan.

Hashu was catfished on Bebo

Not many people remember social media site Bebo these days – but Hashu does for all the wrong reasons.

As a young teen at the time, Hashu got a wake-up in the importance of filters when a girl managed to catfish him.

‘I don’t know what filters she used on her pictures, but back then the filters were different. It was all yellow and green lighting filters and green hearts,’ he said.

‘It was so mad back then; you had no idea what someone looked like.’

The former Gladiators star is giving himself a catfish makeover on the show to become NHS nurse Gemma to the rest of the cast.

But while its intended to tug at the heartstrings of his co-stars, James insists that the gameplay is all for a bigger and more noble cause.

‘I feel that I’m using the nurse aspect of my catfish for the right reasons,’ he said. ‘The NHS have patched me up countless times over the years.

‘They are absolute heroes and that has been highlighted hugely through this pandemic. I want to win for them.’

‘I’d give half the money to the nurses in York hospital, just because I want to
give something back,’ he added.

‘However far £50,000 will go with however many nurses there are, I’d like to win for them. The rest I would split with the players who get to the final.’

Turns out these guys know how to party – with one particular beverage getting everyone’s attention.

‘I can do seven shots of Sambuca at once. I can eat £30 worth of Chinese
takeaway to myself, is that a talent? I’d say that’s a talent,’ joked Manrika.

But she has some competition in the form of 57-year-old Jamie, who is joining The Circle with his daughter.

‘I used to run a pub company, and I learnt that I can stick lots of shots
of flaming Sambuca on my face,’ Jamie said.

‘Though that’s probably not something to discuss in front of my daughter.’

We have a lot of questions.

‘I have always been a fan of reality TV. I live for drama, chaos and anarchy!’ Vithun said. ‘There has never been an Asian winner of a civilian reality TV show in the UK.

‘I want to try and make history. In life, looks matter a lot and if you’re not commercially attractive your opinion matters less, but in The Circle everyone has an equal voting power, so people will be forced to acknowledge me.

‘I’m someone who has always felt overlooked and ignored, so this might be the only place in life where I’m going to get an equal level of recognition.’

Yolanda was married for just one day before entering The Circle

Newly married Yolanda started her experience on The Circle just a day after tying the knot to her husband Chris.

She is now using his face to get ahead in the game, playing him off as a single and celibate Christian with a laidback attitude.

The pair hope to use the prize money to build up Chris’s landscaping firm.

‘With the prize money, we would set up a landscaping firm and all of our
employees would be people with no current skill set and feel like the world
has given up on them,’ she said.

‘We’re here to give them that opportunity to rise and shine and show the world that they got it, because we believe in them.’

The Circle starts tonight at 9.15pm on Channel 4. 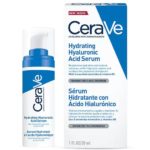 Finally The CeraVe Hyaluronic Acid Serum Has Arrived in the UK, and Yes, It’s as Good as the Hype