Playing Princess Diana in The Crown may have made Emma Corrin a household name, but the actress has admitted she’s glad to move on from the character.

The Netflix drama dropped its fourth season in November, with Emma stealing the show alongside Josh O’Connor as they depicted Charles and Diana’s complicated marriage and relationship breakdown.

But a time jump in season five means Elizabeth Debicki will now pick up the character of Princess Diana several years on, leaving Emma free for new projects.

Speaking about leaving Diana after only one season, Emma has admitted her relief, fearing she would be typecast if she were to stay on The Crown for too long.

‘I’m looking forward to it,’ she admitted to Observer New Review. ‘Though I’m sad I only did one series, I always knew that was all I was signing on for and I played her from 16 to 28. I took her from girl to woman and I loved that arc.

‘But I’m also quite pleased to move on. The industry loves to pigeonhole.’

‘The sooner I can move away from doing posh English, the better, even though that’s what I am,’ she added.

The Crown is already a frontrunner for the 2021 awards season, topping the Critics’ Choice Awards nominations alongside Ozark.

But season four didn’t come without its controversies, with Culture Secretary Oliver Dowden previously proposing the TV series air a warning message to tell viewers the content was a work of fiction rather than fact.

However, Netflix declined the demand, and the cast – including Emma – called out the MP for his ‘ridiculous’ proposal.

Earlier this month, Emma said: ‘The Crown is accurate insofar as it’s about a family over a period of time, and we have factual information about what happened to the country—and to the family.

‘So, you can write down all the facts as if it were a timeline, but all the substance is fictitious. We can know that Diana and Camilla [Duchess of Cornwall] went to a restaurant called Menage A Trois, which is hysterically ironic, but it happened, but we obviously don’t know what was said, so that is fiction.

‘But that’s how a lot of series operate.’

The Crown is available now on Netflix. 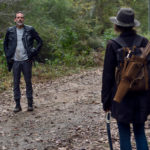 When is The Walking Dead season 10 finale and will there be another series?