Fans of The Kelly Clarkson Show have plenty of reasons to celebrate after it’s been confirmed that the show will stay on air till 2023.

NBC has renewed the show for two more seasons as the show continues to win over the hearts of viewers.

The show currently airs on over 200 syndicated stations, with NBCUniversal Syndication Studios already selling seasons 3 and 4 of the talk show to more than 75% of the US.

Tracie Wilson, executive vice president of NBCUniversal Syndication Studiosy, announced the news in a statement which read: ‘One ray of sunshine in this wildly unpredictable year is that we get to continue to deliver to stations and fans a show that brings people together.

‘This wouldn’t be possible without the heart and humor of the talented and dedicated Kelly Clarkson and our production team, led by the incomparable Alex Duda, both of whom are masters of storytelling. It’s easy to see why Emmy voters, critics and viewers have become such loyal fans of the show.’

The critically acclaimed talk show has been a hit since it launched in 2019 and even enjoyed the ‘highest daytime debut’ in seven years.

The series was one of many forced to shoot remotely when the Covid-19 pandemic began earlier this year, with Kelly rising to the challegene and filming at her Los Angeles home.

But production was able to return to its Universal Studios home in September, with a virtual in-studio audience helping fans from across the country be ‘in the room’ each day.

Earlier this year, the Grammy-winning artist was awarded an Emmy for her role as the show’s host. 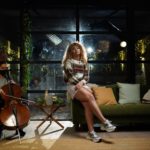 Ella Eyre Chose a Pretty Surprising Tune For Her 2020 Christmas Single; Here’s Why