The Masked Singer’s Glenn Hoddle wished he practised singing with a cardboard box on his head before going on to compete on the ITV show.

The former England manager was unveiled as Grandfather Clock on Saturday, much to the surprise of judges Davina McCall, Jonathan Ross, Mo Gilligan and Rita Ora, who all failed to guess his identity.

Speaking to Metro.co.uk after his great reveal, Glenn confessed that he ‘missed a trick’ when it came to rehearsing at home – and advised future contestants to wear something on their heads while tuning their vocals.

‘You forget you’re going to put this great big costume on,’ Glenn said. ‘What I should have done is, I should have walked around the kitchen and lounge with a cardboard box on my head and practised that way because it would have been more realistic.

‘It was very hot and very difficult to sing under that big box on my head and that surprised me. Until I got there, I didn’t realise how difficult it is to sing in those circumstances.’

Glenn suggested: ‘Anyone reading, that’s not a bad idea. If you’re going into it next series, try a cardboard box on your head and singing.’

The Masked Singer is a top secret process and Glenn reckons he could now take a job as a spy.

‘I think I could do that job if anyone needs one,’ he enthused. ‘I think I can keep things a secret.’

Although he managed to keep his appearance on the show firmly under wraps, he did confess that he found it difficult to keep quiet.

‘You wanted to tell people,’ he told us. ‘Honestly, there were a few times when it was on the tip of my tongue.

‘It was recorded back in September and there were times I was talking to family and I almost said what I was doing and had to drag it back.’

He added: ‘There were only about four people actually that knew. I kept it really tight as to who I told and who I didn’t. 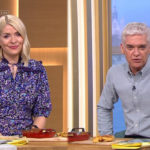 Dancing on Ice: Injured Denise Van Outen brushes off judges’ remarks as she removes mask to eat crisps in the back of a cab