Bush Baby has become the fifth contestant to be eliminated from The Masked Singer UK, leaving the panel and viewers absolutely gobsmacked.

During the latest episode of the competition, all eight of the remaining singers took to the stage.

Tonight, after Bush Baby was chosen by judges Rita Ora, Mo Gilligan, Davina McCall and Jonathan Ross to exit the series, they removed the top part of their costume to reveal comedian and actor John Thomson underneath.

The panel were astounded by the singer’s true identity, with Davina exclaiming ‘I can’t believe that!’ over the big surprise.

Fans watching at home were similarly in a state of shock.

Blue singer Antony Costa admitted that he’d been stumped by Bush Baby’s identity, tweeting: ‘Wow John Thomson great shout people who got that #MaskedSingerUK this one threw me big time.’

‘Bush Baby was John Thomson wow that was a difficult one,’ another viewer commented.

‘I love John Thomson!! How did I not guess,’ someone else remarked.

When asked why he decided to do The Masked Singer, the Coronation Street star replied: ‘Why not?’

After his appearance on the programme, John revealed that he was originally asked to take part in The Masked Singer UK last year, but couldn’t as he was in the middle of filming Cold Feet.

He revealed that he was actually given three costumes to choose from and decided to go with Bush Baby, having loved the outfit’s ‘cutesy factor’.

John also admitted that he didn’t mind leaving the competition halfway through, as he ‘wasn’t in it to win it’.

Before Bush Baby’s reveal, some of the names put forward for the character included Matt Lucas, Noel Fielding and Peter Andre.

While Dragon also ended up in the bottom two, they were saved by the judges to sing another day.

There are now only seven contestants left in the running for the win.

Plus, comedian and RuPaul’s Drag Race UK judge Alan Carr will be making a special guest appearance on the panel. 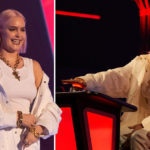 The Voice 2021: Anne-Marie reveals which singers she regrets not turning for 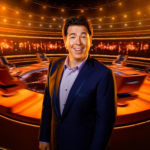 Michael McIntyre ‘thrilled’ as The Wheel is recommissioned for second series