Numerous fans of The Masked Singer UK believe they’ve sussed the true identity of Bush Baby, coming to the conclusion that it could be Matt Lucas behind the mask.

On Saturday night, Bush Baby returned to the stage, performing a groovy rendition of Elvis Presley’s A Little Less Conversation.

Several names have been mentioned when trying to guess the singer’s identity, including the likes of Dynamo and Jamie Oliver.

But a large number of people reckon it could be none other than Great British Bake Off presenter Matt.

One of the main clues pointing towards Matt is the fact that Bush Baby wears a onesie similar to the outfit he wore as George Dawes on Shooting Stars.

So could it be him? These people seem to think so.

‘All the clues point to Matt Lucas,’ one person said, mentioning the fact that Bush Baby has made several references to baking on the show and Matt is of course on Great British Bake Off.

‘Bush Baby – Matt Lucas. Not changing my mind on this one,’ another person said.

‘The drums in the clues as well now. Night sky… Shooting Stars.’

Matt himself even added further fuel to the speculation, tweeting: ‘Bush Baby is Matt Lucas, surely,’

It will be a while until we discover who Bush Baby is, as the studio audience saved them during tonight’s show.

Viking and Grandfather ended up landing in the bottom two, with Harlequin and Blob also saved from elimination. 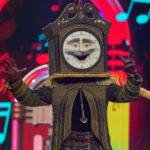 What History Says About How the Pandemic Will Change Fashion