href=”https://metro.co.uk/2020/11/12/reese-witherspoon-teases-the-morning-show-season-2-with-set-picture-13586240/”>The Morning Show set as filming resumes for season 2, demonstrating how the production is being kept Covid-safe.

After season 1 of The Morning Show was released on Apple TV+ in November last year, season two began filming in March, before being halted due to the coronavirus pandemic.

Seven months later, filming was finally back on track, albeit with certain precautions put in place to keep the cast and crew safe amid the ongoing Covid-19 outbreak.

While striving to remain at the top of her game without her work partner of 15 years, Alex faces competition from news reporter Bradley Jackson (Reese Witherspoon).

On Tuesday, Jennifer, 51, posted several behind-the-scenes pictures on her Instagram Story from set, writing in one caption that she is ‘back to work’.

In the first photo, the Friends star is wearing a belted, button-up jacket, in addition to a transparent visor over her face.

For her second Instagram Story post, Jennifer took a picture of the back of a crew member’s head, who is wearing a mask with the phrase ‘F**k Covid-19’ written on the back.

‘I love my crew,’ the actor captioned the image, which also featured a monitor in the corner showing Jennifer in a scene in the upcoming season.

In the third image, she shared a view of her make-up table, complete with a tissue that she used to blot her lipstick.

Reese, 44, also recently posted a picture on social media from The Morning Show set, sharing a photograph which shows her sitting in the doorway of a trailer, a mug in one hand and a script in the other.

‘Wakey wakey. It’s back to work!’ the Big Little Lies star wrote in the caption.

It was recently announced that comedian Hasan Minhaj, who hosted Patriot Act with Hasan Minhaj for six seasons, will be joining the cast of The Morning Show for season 2.

The Morning Show will return to Apple TV+. 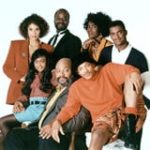